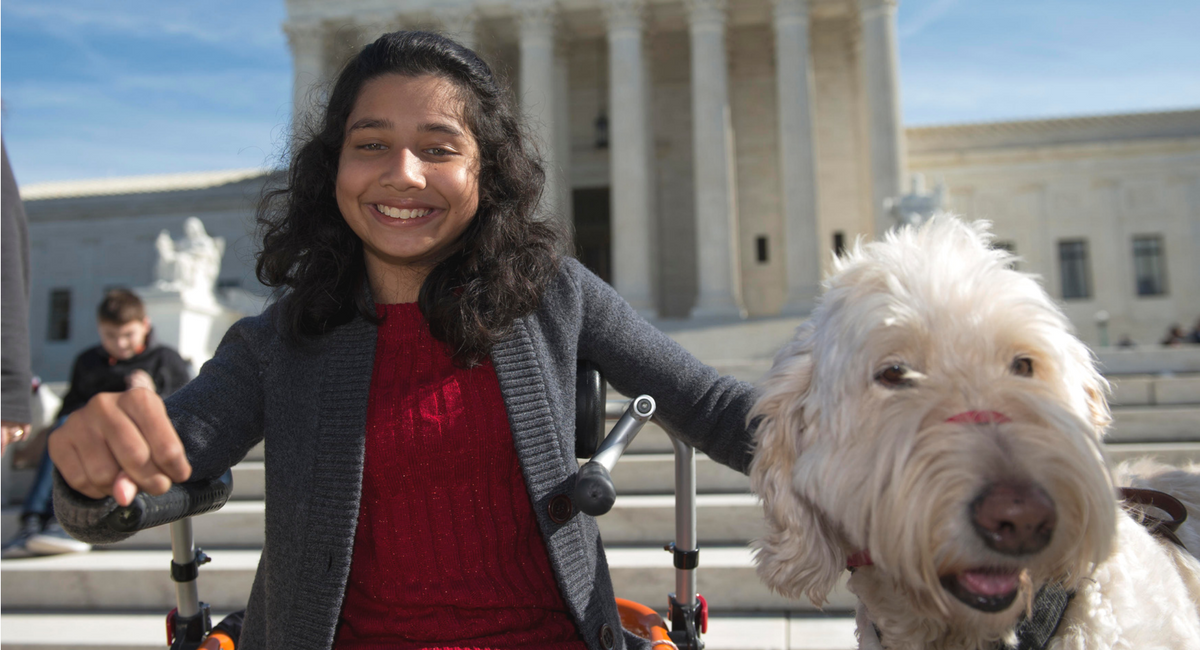 It was a great relief to learn that the U.S. Supreme Court recently sided with a girl whose Michigan school refused to allow her service dog in class. Ehlena Fry, 13, was born with cerebral palsy, a neurological condition that limits her mobility. Her service dog, a goldendoodle named Wonder, has been trained to help her balance, to open and shut doors, to turn on lights, to retrieve items off the ground and similar tasks.

“I saw with my own eyes how Wonder helped my daughter grow more self-reliant and confident,” Stacy Fry, Ehlena’s mother, told a Reuters reporter. “We are thankful that the Supreme Court has clarified that schools cannot treat children with disabilities differently or stand in the way of their desired independence.”

The ACLU of Michigan helped Fry to advocate for her rights.

“To force a child to choose between her independence and her education is not only illegal, it is heartless,” the organization said.

The Supreme Court justices decided 8-0 that Fry and her family are not obligated to endure a time-consuming appeals process before suing for the emotional distress she suffered by being denied her dog’s assistance. The ruling will make it easier for other students to seek similar resolutions in the future.

Dogs are able to help people with many different chronic diseases – sniffing out physiological changes before a human or specialized technology can even detect them, sensing changes in a heart’s regular rhythm, reminding a patient to take prescribed medications, summoning help when needed or fetching equipment or needed therapies for their owners.

Keep reading to learn about additional chronic diseases a service pet can help you to manage.

Caroline Little brought more awareness to service animals when wrongly asked to leave a grocery store she regularly visits with her dog, Ash. Little is now in her 20s and has suffered from asthma attacks since she was 9 years old, according to a story broadcast on Fox News in Dallas-Fort Worth.

“Ash can detect when I’m going to have an asthma attack,” Little told a reporter. “When you have asthma, you basically don’t have enough air in your lungs to breathe, and it’s scary.”

Her doctor recommended she get a medically trained service dog. Luckily the store, Albertson’s, used the opportunity to improve education of employees on service dog issues and to alert them that service animals are welcome in the stores.

A petition has been started online to encourage the U.S. Department of Health and Human Services and some of the country’s biggest health insurance companies, including WellPoint, CIGNA, Aetna, Humana and United Healthcare, to add diabetic alert dogs to medical insurance policies.

“I am dismayed that these effective assistants to managing and maintaining awareness of blood glucose levels are effectively uncovered by the insurance industry,” states the petition.

You can read four stories of diabetic alert dogs and more about the petition by clicking here.

Juvenile diabetes is tough for any child, but complicating matters for Brianna Bertrand is that she not only has Type 1 diabetes – she also has autism. The Kansas youth can’t communicate when she doesn’t feel well. Luckily, she has Cyrus, a medic-alert service dog trained to detect if Bertrand’s blood sugar levels are dangerously low or too high.

“Brianna is a child who can’t communicate and can’t communicate effectively,” said her doctor, Elaine Harrington at Via Christi Clinic. “To have a dog who can pick up on whatever little slight change Brianna does just before she needs some attention is great — before it becomes a catastrophe or a major issue. … Dogs just have a sixth sense that we can’t explain.”

According to an article in The Wichita Eagle, the Children’s Miracle Network Hospitals at Via Christi Health and the Butler County Community Developmental Disability Organization helped the family to afford the $2,500 fee to obtain Cyrus. The yellow Labrador retriever was trained at CARES (Canine Assistance, Rehabilitation, Education and Services).

“Any opportunity we have to help a family out and ease their financial burden that’s our whole mission — to help sick and injured kids,” Jill Bosley, director of development for Children’s Miracle Network Hospitals at Via Christi Health, told The Wichita Eagle.

On occasion the family still must deal with people who don’t understand disability laws or think Cyrus is an everyday pet rather than a service animal.

“It is so important that he goes everywhere with her,” Dana Bertrand told the newspaper. “There are times we think she’s fine, and he has shown us that she’s not fine and that is huge.”

Edward Colie’s life has been saved multiple times by Eric, his cardiac alert dog. Colie, of South Carolina, has a high-risk heart condition, and Eric, a miniature red poodle, is trained to detect drops in blood pressure and cardiac trouble — and to act when he detects that something is wrong.

Eric will paw at Colie’s leg if something is wrong, or he will jump into his owner’s lap and thump his head on his chest.

“Eric’s natural ability paired with rigorous training has saved Colie’s life on a number of occasions,” according to a story by Anything Pawsable. “Without Eric, there’s a good chance that Edward Colie wouldn’t be alive.”

Lupus, a chronic inflammatory disease, is frequently accompanied by debilitating fatigue. When she’s battling extreme fatigue, Becca Hart knows she can rely on her dog, Mike, for help. The greyhound will open doors and fetch items off the ground that she needs.

But that’s not all Mike can do.

Hart was once in a waiting room of Wake Forest University Baptist Hospital in North Carolina for a routine visit when her dog sounded the alarm. He knew something was wrong before his owner had any clue of what was happening in her body.

“He’s trained not to bark, so he made a howling noise,” Hart said in an article at the Resource Center on Lupus. “They took me back to the EKG, and they found my heart was out of rhythm.”

Freckles and Trey Sherrill’s photos sit side by side in their high school yearbook. The two are nearly inseparable.

“I don’t know how I’d handle this without her there with me 24-7 at school, home, church, practice … everywhere,” Sherrill told The Jackson Sun newspaper. “She keeps me safe when I need it.”

That’s because the Tennessee teen was diagnosed with juvenile myoclonic epilepsy, which usually shows up with seizures during adolescence. Lucky for him, his dog Freckles is trained to detect changes in scent that signal an imminent seizure, allowing the dog to alert him so he can stop what he’s doing and get in a safe place, and she can ring a doorbell in his bedroom to wake up his parents if a seizure occurs at night.

Freckles is so integrated in Sherrill’s life that she even has a spot on the school baseball team. In fact, she’s among the most popular students at the school.

“Everybody knows her because everybody’s going to know the dog in school,” he said.