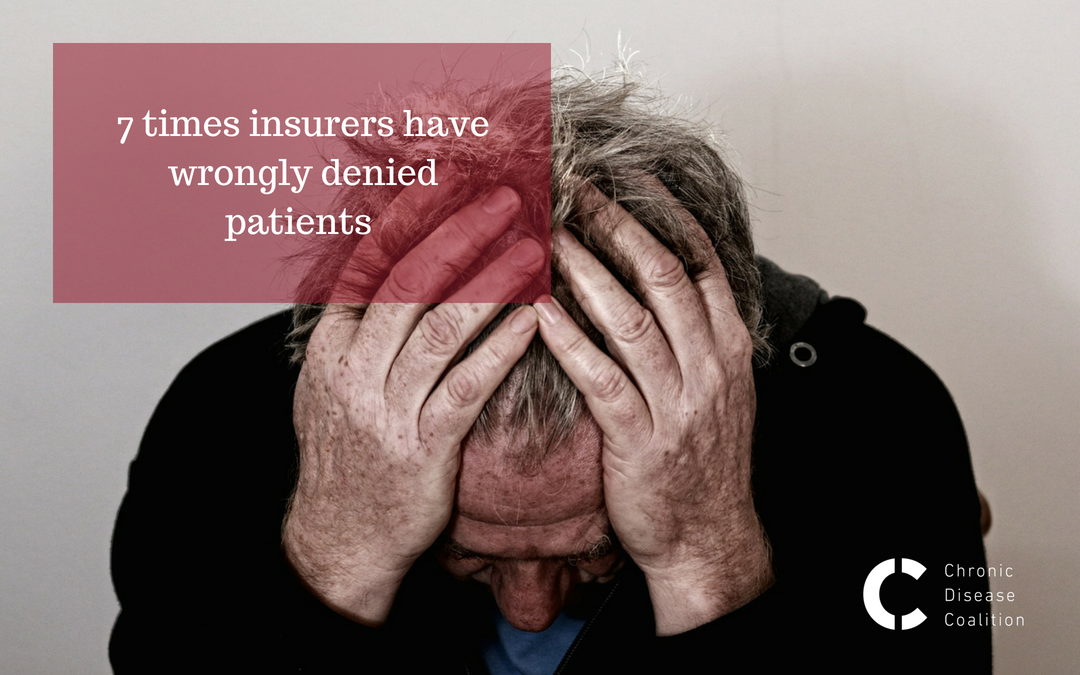 Sometimes it’s hard to understand how health insurance companies keep getting away with wrongly (and possibly illegally) denying patients access to the coverage they have paid for.

Following are seven recent examples of patients being targeted and harmed by profiteering insurers.

1. An Oklahoma City woman had already undergone chemotherapy and surgery to remove one of her breasts – she certainly didn’t want to worry about fighting over getting radiation with her insurer. But that’s exactly what she was forced to do. Even though her doctor had prescribed proton therapy to reduce the risk that she would experience heart problems down the line, the 34-year-old cancer patient was denied by Blue Cross Blue Shield three times.

“You have go to war over these things,” Hauli Sioux Gray told The Oklahoman newspaper. “It’s not right.”

2. In Chicago, it took four years for Joanne Guthrie-Gard to find the right seizure medication for her daughter, whose epilepsy, during the worst of it, caused her to have 20 seizures a week.

Then, four months into the new treatment, her insurer decided to stop covering it and told her she must switch to a cheaper option with side effects, including dizzy spells, unsteadiness, slurred speech, — or pay $10,000 every few months to get her prescribed medication. This tactic is called nonmedical switching. Insurers – in this case, Blue Cross Blue Shield – use the ploy to avoid paying for certain types of treatments.

“To have someone come in and say, ‘We’re not covering that drug now,’ it’s devastating,” Guthrie-Gard told the Chicago Tribune.

3. Patients with rare diseases are particularly likely to face obstacle after obstacle to obtain the insurance coverage they need. Running coach Roger Morse knows this well. Diagnosed with a rare neuro-muscular disease called myasthenia gravis, or MG, Morse has repeatedly run into brick walls with insurance.

Morse pointed to the often-retired doctors reviewing requests and appeals for patients struggling to get the specialized treatment and care they need.

“As a result, my husband and I spent more than $100,000 to fund my proton therapy —cancer treatment that cured me,” Vivian Heckman wrote in Florida Today. “What amounts to a large part of our life savings means much less for a billion-dollar company, and it’s a sickening feeling to realize that your health insurer would rather save money than save your life.”

5. An Oklahoma man battling Stage 4 Non-Hodgkin’s Lymphoma felt like he had a second chance at life when his survival odds went from 10 percent to 50 percent and he secured a spot in a clinical trial in Houston, Texas. His family’s hope plummeted when his insurer, Blue Cross Blue Shield, denied coverage for the trial.

He went to Texas anyway in hopes of being able to live, even if stuck with debt for the rest of his life.

“We don’t have much time to wait anymore,” his wife told a local news station covering their struggle.

6. A Florida father found himself in the fight for his life when he was diagnosed with brain cancer only a few months after his child was born. He and his wife thought they could handle it all – until their insurance company, Blue Cross, denied their claim for a potentially lifesaving treatment recommended by doctors.

7. Sometimes, fighting back and continuing to pressure greedy insurers can lead to a happy ending. This was the case for an Omaha, Nebraska, couple.

Paul Penke was initially denied the coverage he needed for treating a brain tumor. But after news stories aired about the situation, Premiere Blue Cross reversed the denial, allowing him to receive the treatment he desperately needed to survive. He and his wife rejoiced.

“The hope is our story can help other people,” he told a local news station, “and give hope to other people that are in a similar position.”