Baylor basketball star battles opponents on the court, and chronic disease off 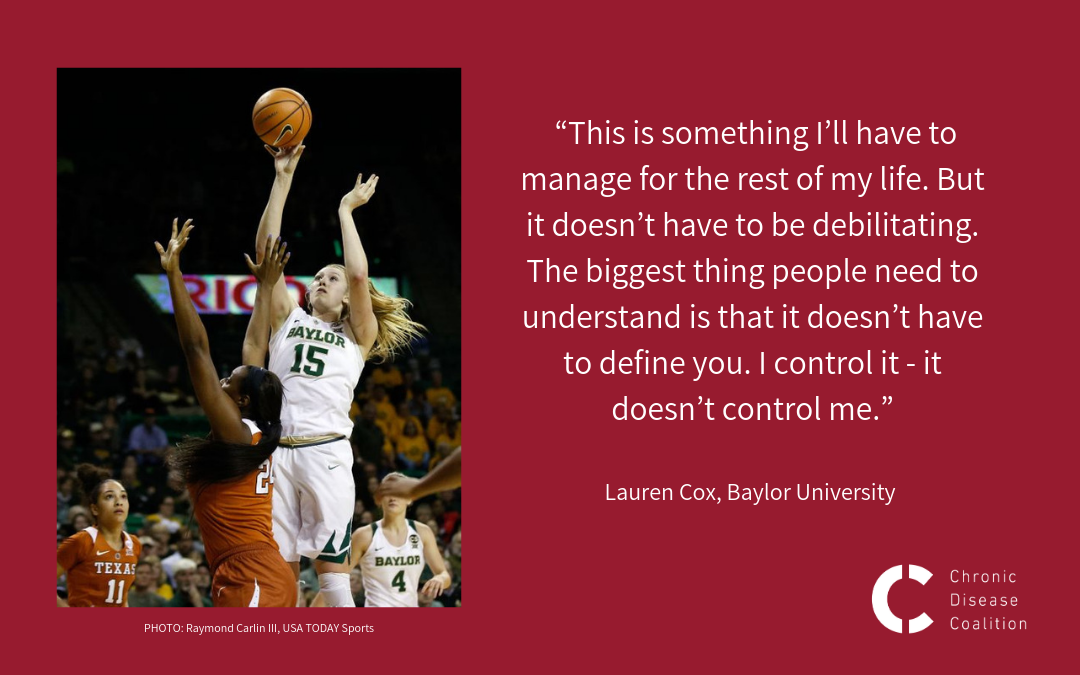 Basketball fans enjoyed a real treat earlier this month with the NCAA Women’s Basketball Championship Game between Baylor and Notre Dame. A great game and two incredible teams who battled down to the wire before Baylor emerged with a 1-point victory. Baylor had been comfortably ahead by 14 points with a little over a minute to go in the third quarter when their star power forward and emotional heart-and-soul of the team, Lauren Cox, went down with a devastating knee injury. Thousands in the arena and millions on television were stunned to watch as Cox was wheeled off the court. But owing to her fighting spirit, Cox was able to come back to the sidelines in the fourth quarter, on crutches, to cheer her team on to a hard-fought victory.

We learned after that stunning game and heroic performance that Lauren Cox not only battles opponents on the court for her team, but that she also battles chronic disease. Cox, now a 6-4 junior All-American athlete, was diagnosed with Type 1 diabetes when she was only 7-years-old. Type 1 diabetes is an autoimmune disease where the body is incapable of producing its own insulin, an essential hormone for metabolizing glucose. People with Type 1 diabetes, previously known as juvenile diabetes, must take insulin through daily injections or through an insulin-pump system. People with this disease must also continuously test and monitor blood-sugar levels in order to stay within safe ranges.

An excellent article by Lindsay Schnell of USA Today Sports describes how Lauren Cox, and the Baylor coaching staff, must be constantly vigilant in respect to Cox’s blood-sugar levels during practices and games.  Blood-sugar levels that are too high can cause organ damage and lifelong complications; while blood-sugar levels that are too low can cause dizziness, severe disorientation, seizures, loss of consciousness and even death. To assure these challenges are avoided, the Baylor bench and locker room are well-supplied with apple juice, Gatorade and gummy-bears.

Cox takes it all in stride. One time during a game her insulin-pump actually fell off. With the game still happening around her, she was able to quickly pick it up and toss it to her coach while running down the sideline and staying in the play. No harm no foul, as they say. On the challenge of diabetes, that same USA Today Sports piece quotes Cox as saying, “This is something I’ll have to manage for the rest of my life. But it doesn’t have to be debilitating. The biggest thing people need to understand is that it doesn’t have to define you. I control it — it doesn’t control me.”

We couldn’t agree more. We salute Lauren Cox for her drive, determination and discipline while also recognizing the severe challenges of diabetes. She’s an inspiration for all of us in the chronic disease community. We wish her a fast and full recovery from her knee injury and look forward to watching her play again next season as Baylor defends its national championship.