Chronic Disease Coalition advocates for Americans with diabetes in D.C. 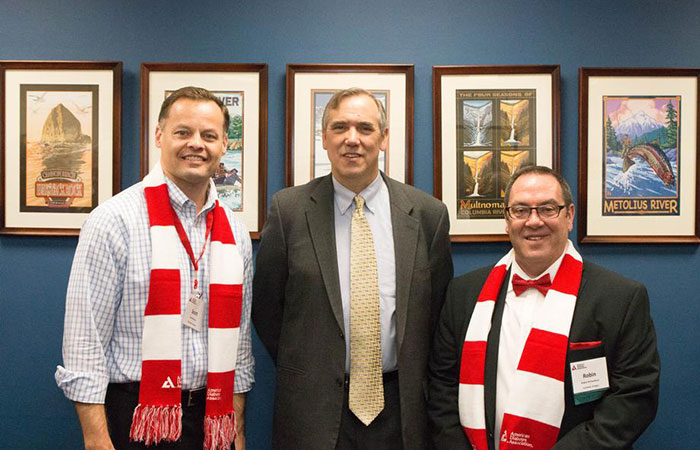 The cost of diabetes in human terms is staggering. Today in America, more than thirty million people suffer from diabetes. Another ninety million Americans have “pre-diabetes.” Diabetes kills more Americans every year than breast cancer and HIV, combined. Diabetes is also a leading cause of other dangerous health effects and chronic disease conditions, including blindness, kidney failure, heart disease, stroke and amputation.

Last week, as it does every year, the American Diabetes Association (ADA) hosted its “Day at the Capitol” in Washington, D.C. More than 300 diabetes advocates from across the country joined ADA staff to lobby Congress. Joining those advocates this year were 40 current and former professional football players known as “Team Tackle.” Not surprisingly, Team Tackle created quite a buzz within the halls of Congress.

As executive director of the Chronic Disease Coalition, Scott Bruun said was honored to attend and actively participate in the Day at the Capitol. In addition to his duties with the coalition, he volunteers as the Oregon and Southwest Washington advocacy director for the American Diabetes Association.

Here’s what Bruun had to say about the trip:

“My interest in diabetes advocacy and my work at the Chronic Disease Coalition stems partially from the fact that I have had Type 1 diabetes for 35 years. Over those years I have taken approximately 52,000 insulin injections, while also pricking my fingers about 102,000 times to check blood-sugar levels.

“But those 150,000-plus jabs are not what hurts. What hurts, and what motivates me to advocate for the ADA and the CDC, is my youngest daughter Katie, who was also diagnosed with Type 1 diabetes four years ago.

“That’s why I was excited to meet with Oregon’s U.S. Senators Ron Wyden and Jeff Merkley last week (as well as staff from Congressman Greg Walden’s office). While meeting with Oregon’s senators, our advocacy team asked for $2.167 billion in funding for the NIDDK (National Institute of Diabetes and Digestive and Kidney Diseases). The NIDDK is the primary institute at the National Institutes of Health supporting diabetes research. Funding for NIDDK is essential to diabetes prevention, improving the lives of people with diabetes, and curing diabetes.

“We live in a great country. And only our country has the talent and resources – intellectual, academic, structural and financial resources – to find a cure to diabetes. As I conveyed to my elected leaders last week, what a great legacy that this Congress can leave by being an integral part of the ‘medical moon-shot’ that leads to a cure to diabetes.”