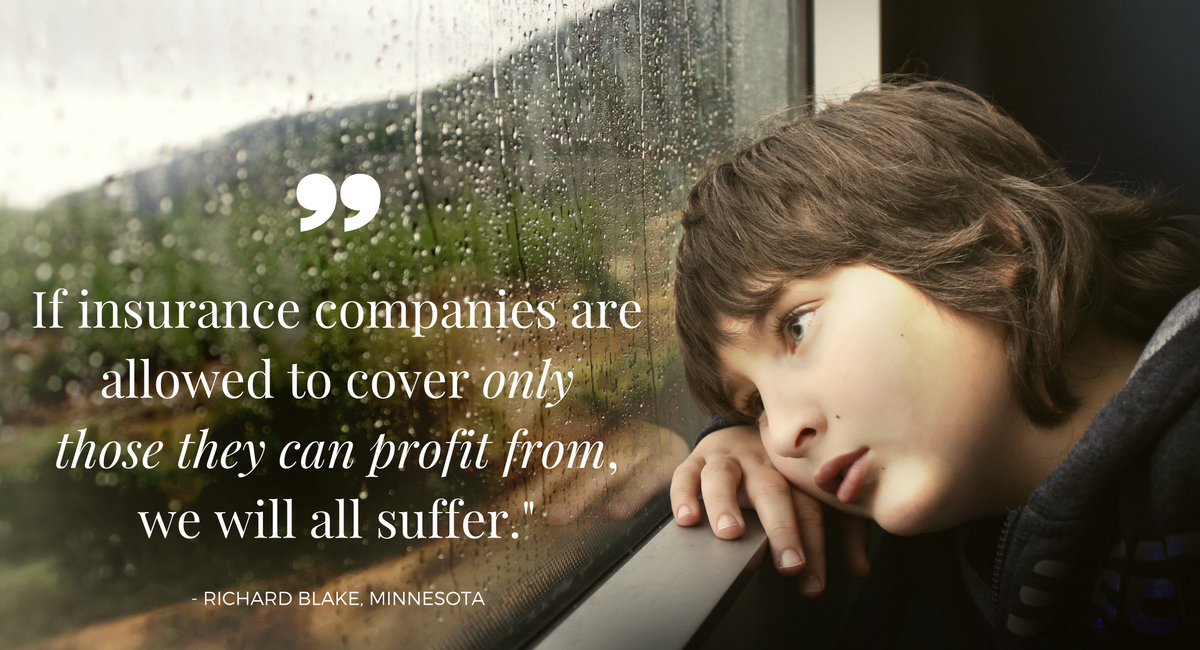 “It is important that everyone has access to health care when they need it. There will come a time when we or someone we love will need expensive medical care. If insurance companies are allowed to cover only those they can profit from, we will all suffer.“

That quote comes from Richard Blake, a member of the Grand Rapids City Council in Minnesota, in a letter to the Star Tribune. Blake wrote in response to concerns about health insurance companies’ plans to raise premiums in 2017, as his daughter, diagnosed with deadly brain cancer in 2014, is “one of the 103,000 Minnesotans who will lose their Blue Cross and Blue Shield coverage next year.”

“Before the Affordable Care Act, insurance companies could deny coverage to people with preexisting conditions,” he said. “Our daughter and others like her would have been left without health insurance. Now BCBS accomplishes the same thing by leaving the whole individual market.”

At the same time, insurers like Blue Cross are attempting to reject premium payments made on behalf of patients by charitable organizations. This too is part of a disturbing and growing trend in American health care.

Below is an article written by Chronic Disease Coalition Executive Director Scott Bruun on this issue involving patient discrimination based on disease as it unfolds in Minnesota and other states nationwide.

The Tribune’s recent article “Insurers wary of premium help for patients” details the rather shocking practice of insurer Blue Cross of Minnesota in rejecting premium payments made on behalf of patients by charitable organizations. As Executive Director of a national patients’ rights organization, I am sad to say this is part of a disturbing and growing trend in American health care.

For decades, non-profit organizations have provided charitable assistance to patients who would otherwise be unable to afford health coverage. These programs have helped tens of thousands of Americans receive needed treatment in the context of constantly rising health insurance costs.

Every program varies, but how it works is simple: a patient without sufficient income or savings to afford their premium or pharmaceutical costs will apply to one of the several non-profit, charitable organizations that administer assistance programs. Provided the patient meets eligibility requirements, the charity in question will pay their insurance bills directly, or otherwise provides them with a grant.

Our organization, the Chronic Disease Coalition, works with many patients that use these financial assistance programs. Every day, we see how beneficial these payment assistance programs are for patients. Chronic disease sufferers, many of whom can’t work because of their illness, are able to get the care they need, and their families are relieved of having to make the choice between medical treatment, or other basic necessities like food and rent.

Unfortunately, just as they are becoming even more necessary, these financial assistance programs are facing increasing obstacles from big insurance companies. Some 38 states have now seen some form of discriminatory rejection by insurance companies of third party assistance, with Minnesota being the latest in this trend. Earlier this year, Blue Cross sent out letters to patients in the Minnesota informing those patients that they would no longer be able to use assistance programs to help pay their premiums.

All too often this practice is given a green light by state insurance regulators whose job it is to protect the welfare of patients and consumers. We fear that this is the case in Minnesota right now. In June of this year, the Minnesota Department of Commerce released regulatory guidance for insurance companies on how they were to treat charitable financial assistance programs. That regulatory guidance allowed insurers to reject premium assistance from non-profits that are not “financially disinterested.”

We often see this exact language in other states, where it has been used by insurance companies to reject assistance from charitable non-profits that receive any donations from health care providers. Insurance companies claim that these organizations are essentially tools of the providers, and that they only help patients pay insurance bills with the expectation that that money will come back to them in the payouts for treatment from insurance companies.

This argument from insurance companies is baseless, self-serving and disingenuous. The scenario they describe is already illegal under state and federal anti-kickback provisions.

Moreover, the non-profits that do receive some portion of their funding from providers have already adopted exacting standards to ensure that their programs are managed transparently and independently of the interests of any one donor. These standards include a uniform application process for beneficiaries, independent verification of financial need, and a requirement that donors not make conditional donations tied to which provider a patient sees.

The regulatory guidance provided from the Minnesota Department of Commerce would do nothing to strengthen those measures already in place. Rather it would give insurance companies carte blanche to refuse almost any third party financial assistance on the mere accusation of a conflict of interest.
Such has been the case in the others states where this language has been proposed or adopted. We have seen first-hand in places like Idaho the willingness of insurers to use spurious accusations of financial interest to deny patients coverage.

Patients have many things to be concerned about. Being told by their insurance company that they cannot accept charitable assistance should not be one of them. On behalf of chronic disease patients in Minnesota, we urge the Department of Commerce to issue rules protecting patients’ access to these programs, not give free license to insurers to deny them.

Scott Bruun is a former state legislator from Oregon. He is executive director of the Chronic Disease Coalition, a nationwide patients’ rights advocacy organization.