How a Life Changing Diagnosis Turned into My Life’s Purpose 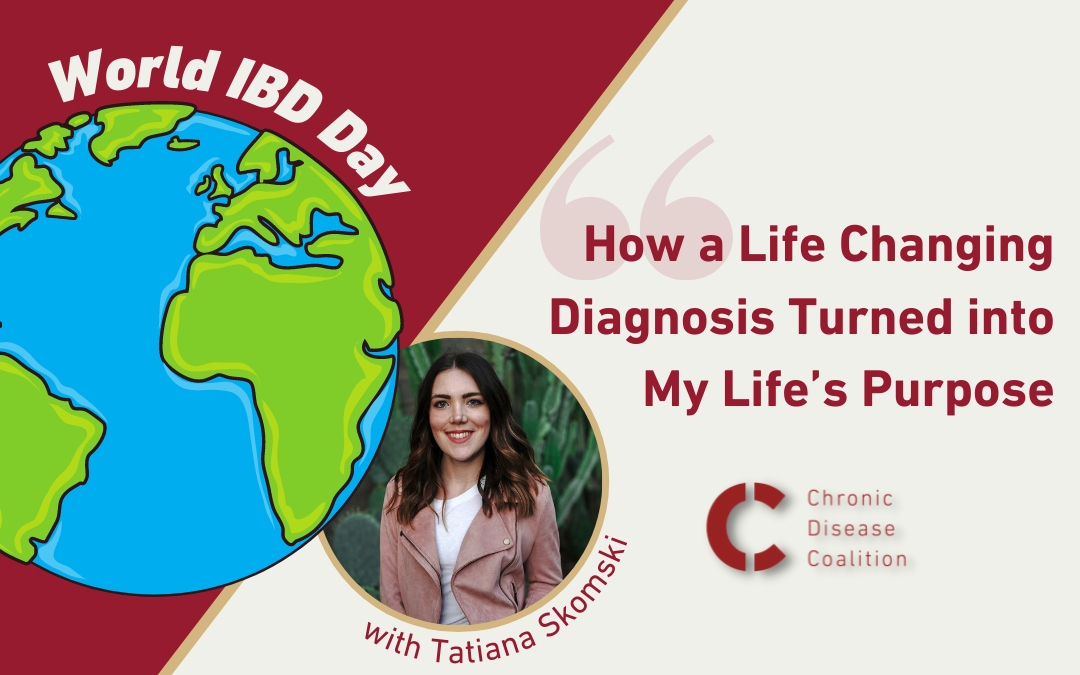 I’ll never forget the moment the doctor told me, “You have ulcerative colitis, and it is one of the worst cases I have ever seen.”

Shock. Panic. Anger. Confusion. Overwhelmed. Those were just a few of the emotions I felt when I heard those words. Years of undiagnosed pain lead me to that moment, yet it felt so incredibly isolating and nowhere near the answer I was looking for.

I was 21 years old, almost done with my senior year of college. I was in the midst of the years that were supposed to be some of the best of my life. Yet every day I felt sick. I could barely eat without feeling nauseous. I felt exhausted every moment, and no doctor could tell me what was wrong. I was missing out on making memories, going out with my friends, living in the moment feeling carefree and full of joy. And that’s all I desperately wanted to do. I ultimately lost friends because no one understood why I never wanted to hang out with them. I looked fine, after all.

Since before I could remember, I had periods of my life where I felt sick pretty much all the time. The youngest I remember feeling this way was around age 12 or 13. I always felt sick after eating, and basically everything I tried to eat made my stomach hurt. The first time my mom started taking me to doctor’s appointments searching for answers, we were basically turned away. They did some tests here and there, but the answers were always the same.

“Let’s put her in therapy and see if that helps.”

Never once was my pain validated by a doctor I saw. Thankfully, my mom never gave up and always believed me. But there was only so much she could do.

Years went by, and without answers, I learned how to cope — I learned how to move through life with everyday pain, as if it were completely normal. I went away to college and came to terms with the fact that this might be how I’d feel forever.

A few years later, my symptoms really escalated. And there I was again, faced with doctors who did minimal tests and told me it was all stress and in my head. I took matters into my own hands and made some dietary restrictions that seemed to act as a bandaid for a little while.

Now, here’s where the story gets a little weird.

Growing up, due to the way my jaw was formed, I knew I would eventually need to have jaw surgery and braces once my bones were done growing. Come sophomore year of college, it was time for me to get those braces and begin my journey towards corrective jaw surgery.

Two years later, my senior year of college, I was ready for that surgery. I planned to have it while I was home for winter break. Let’s just say it was one of the most intense things I have ever gone through: a five and a half hour surgery that left me with my mouth wired shut and on a scary amount of painkillers.

The trauma and stress from surgery is what led to my first, life threatening, ulcerative colitis flare. At the time, I didn’t know that’s what it was. All I knew was I was in debilitating pain— I couldn’t walk or keep a sip of water in my system. My parents took me to the emergency room where they admitted me for the night and did my first colonoscopy (EVER) the next morning. The fact that I’d never had a colonoscopy before then still baffles me.

That’s when I heard those words that are so ingrained in my brain:

“You have ulcerative colitis, and it’s one of the worst cases I have ever seen. You’ll probably leave here with your colon removed —it’s that bad,” the doctor said.

I spent the next three weeks in the hospital being pumped full of steroids, iron, blood transfusions, and my current biologic (Remicade) that ultimately saved my life and put me in remission. What followed was me having to withdraw from that next term of school and stay home to start my new journey as, Tati with ulcerative colitis. As I clicked, “withdrawal from term,” I promised myself that day in my hospital bed  that I would finish my college degree no matter what. And I did!

As I slowly but surely gained my strength back over the following months, I was forced to slow down like I never had before. At the time, I resented it. I hated the disease that left me bedridden, alone, and (to me, what felt like) unlovable. I found myself at odds with my disease, hating it and myself for what I had gone through and would be left with for the rest of my life. I was a broken version of myself. I had no self-love or confidence anymore, and I was nowhere near acceptance of my disease.

When I decided I wanted to love myself and accept my chronic illness diagnosis, I went on my own healing journey that changed my life. I created a relationship with myself that I cherish now and wouldn’t trade for the world. I never wanted any woman to have to go through that healing process alone, and so I became a certified coach to help women with chronic illnesses learn how to love themselves alongside their diagnoses. I found purpose, passion, community, and friendships in what ultimately almost killed me.