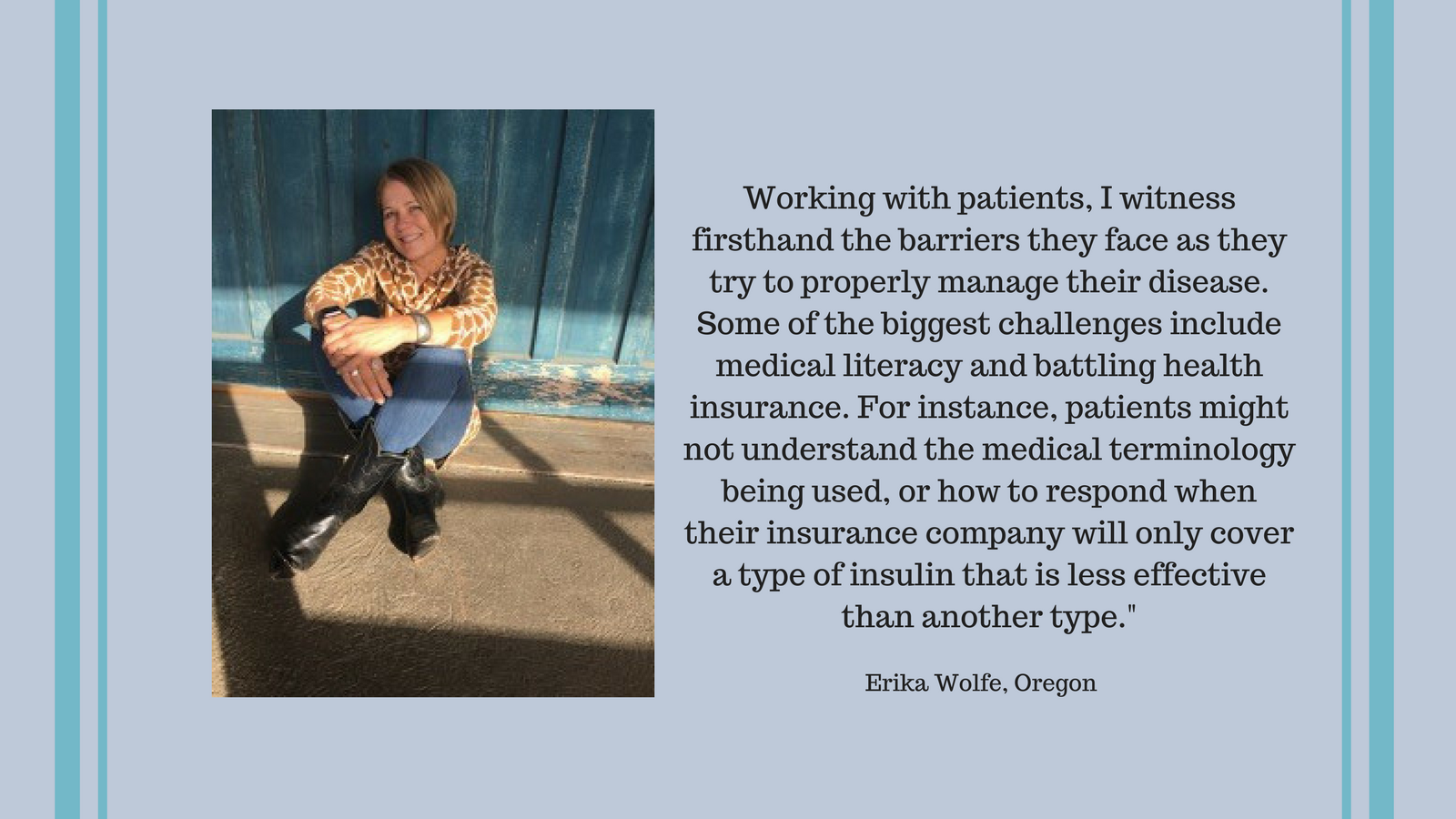 Mother, advocate and diabetes patient, Erika Wolfe of Portland, Oregon, recently showed the Chronic Disease Coalition what it truly means to be a patient advocate.

At 5 years old, Erika was diagnosed with type 1 diabetes. It was a time when diabetes patients didn’t have the tools to properly manage their disease from home. Growing up in a rural town in Colorado, she didn’t have access to an endocrinologist – making treatment even more challenging.

“Diabetes wasn’t really managed back then, there was no such thing as fast-acting insulin – you simply tried to manage it with pork insulin and diet,” explained Erika. “I was an active child and on the ski-racing team, so I always carried sugar cubes with me in the event my blood glucose level would drop.”

Thankfully, Erika didn’t experience any serious complications. As medical advancements were made, she was more effectively able to manage her disease and to start a family. But Erika would soon learn that her son, Jamieson would also have to battle type 1 diabetes for the rest of his life.

“He was diagnosed at 4 years old…any parent of a child with a chronic condition will tell you that it was the most devastating news we could have received,” Erika said. “It was very important for my husband and I to impress upon him that this disease would not limit him and he could properly manage it with the right tools and treatment.”

However, Erika and her son met a road block when he began middle school. Despite laws allowing students with diabetes to test their blood glucose level in the classroom, Jamieson’s school nurse wouldn’t allow him to do it – resulting in a scary situation.

“I received a call from my son, who was at school about to faint because his blood sugar level was too low – and the school nurse wouldn’t let him treat it,” she recounted. “He could have gone into hypoglycemic shock, and we had to threaten the school with a lawsuit to implement a change that was already mandated by law.”

Once the school made the change, Jamieson felt empowered to manage his disease – he is now studying in a doctoral program at Pacific University and has a particular interest in health psychology, according to Erika.

Clearly a model for her son, Erika completed her master’s certificate in patient navigation from the Cleveland Clinic and now volunteers as a patient advocate in Oregon hospitals.

“Working with patients, I witness firsthand the barriers they face as they try to properly manage their disease,” she said. “Some of the biggest challenges include medical literacy and battling health insurance. For instance, patients might not understand the medical terminology being used, or how to respond when their insurance company will only cover a type of insulin that is less effective than another type.”

Erika continues to passionately support patients by providing resources and giving advice, because she remembers what it felt like to battle her disease alone. For chronic disease patients receiving a diagnosis for the first time, or even those who have battled for many years, having a patient advocate – like Erika– to support you in the hospital is invaluable. We encourage everyone to follow her lead and connect with others to share your story, give advice or simply listen.