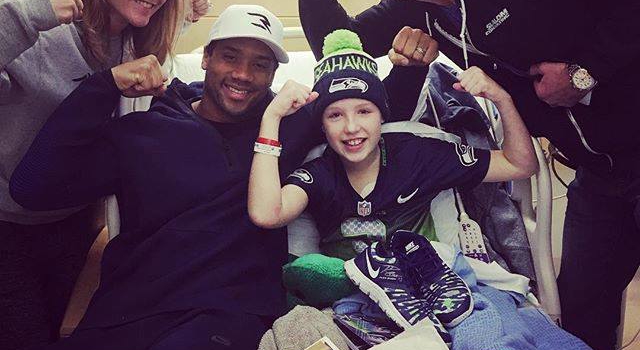 While all people with chronic diseases face challenges, children can have an especially difficult time dealing with health issues during their development. It’s in situations like these when it becomes even more clear that caregivers and volunteers who don’t have chronic illnesses play a crucial role in supporting others who do.

Seattle Seahawks quarterback Russell Wilson is an inspiring example of someone who goes the extra mile to help those dealing with chronic disease. While Sunday is game day for Wilson, on Tuesdays he takes time off from football and visits the patients at Seattle Children’s Hospital.

He said he became used to being in hospitals because his father had diabetes.

“Hospitals aren’t scary for me,” he said on the Seattle Children’s Hospital website. “I spent a lot of time visiting my dad in one before complications from diabetes took his life in 2010. He was only 55 years old. His experiences helped me better understand the unique challenges that hospitalized children and their families face. Their strength has been an inspiration to me.”

He has posted photos and videos from the visits on his Facebook and other social media feeds, touting the strength of the children and their families. In November, he even gave gifts to many of the kids, bringing his new Nike training shoe as a special gift.

Seattle Children’s Hospital has an initiative called Strong Against Cancer that helps children to receive access to new immunotherapy treatments. A recent clinical trial for acute lymphoblastic leukemia resulted in a more than 90% complete remission rate in children with relapsed leukemia, according to the initiative.

Wilson is not only a star on the field but a valuable community player helping others to live better, longer lives.

“I’m humbled by the courage of the patients and families I meet and proud to witness the amazing work of the nurses and doctors who care for them,” he said.