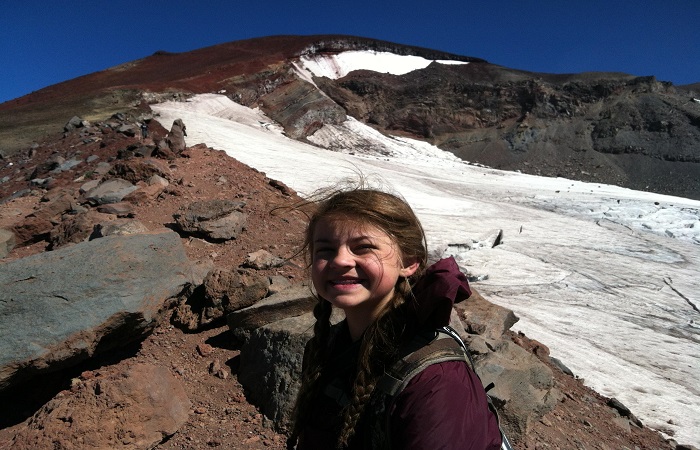 As I turned to watch her take those last, difficult steps to finally reach the summit, I had tears in my eyes. She, on the other hand, was grinning ear-to-ear.

The Friday before last was my 13-year old daughter’s third “diabirthday.” This is the term that kids who have Type 1 diabetes use to mark the day they were diagnosed. My daughter Kate had decided months ago that on this particular day, she wanted to do something big. She wanted to shout to the world that diabetes had not and would not defeat her.

She wanted to climb a mountain.

So that Friday morning we got up at about 3 a.m. and drove from Sunriver past Mt. Bachelor to Devil’s Lake campground and the trailhead. We started our climb, headlamps on, at about 4:30 a.m. We were on our way – God willing – to the top of South Sister, Oregon’s third tallest mountain at 10,400 feet.

Three years earlier, to the day, we had also been at Sunriver. We had noticed that Kate, then 10, was awfully thin, even though she was eating and drinking more than ever. We chalked it up to normal “growing pains” and a hot, active summer. However on the last day of our vacation, our other daughter came down and complained that she’d barely slept. It seems Kate had kept her awake all night by getting up seven or eight times to use the bathroom.

I’d had some experience with diabetes and this was a red flag. Frequent urination and extreme thirst are early symptoms. So we quickly packed, got in the car and drove to Randall Children’s Hospital in Portland. That afternoon, Kate was diagnosed with incurable diabetes.

As any parent who’s had a child with illness can attest, this felt like a stab to the heart. We learned that our daughter would spend the rest of her life with a chronic disease requiring multiple blood tests every day, multiple insulin shots every day, and constant care to manage high and low blood sugars. We also knew that through absolutely no fault of her own, our daughter’s life expectancy would be shortened.

Diabetes is a cruel disease. It’s also expansive and expensive. There are about 3 million American living with the type of diabetes Kate has, and about 25 million when you include both types of the disease.

The public resources spent on diabetes are staggering. The economic burden in Oregon is $3 billion a year. Nationally, we spend nearly $300 billion a year on diabetes care and treatment, up more than forty-percent in five years. And this doesn’t even account for the tens of billions more in costs for heart disease, kidney disease, stroke and eye disease related to diabetes.

Staggering. But not more so, for a parent, than watching a daughter give herself five shots a day so she can simply stay alive.

Oregon, like the rest of our country, has seen explosive growth in diabetes. Chronic diabetes management is the most expensive component of Oregon’s public healthcare budget. We should be doing more, through education and best-practices, to reduce these costs. In fact it’s fair to say that elected leaders in Oregon are failing their fiduciary responsibilities to Oregon taxpayers unless they are working to improve diabetes outcomes.

But the biggest challenge is not Salem. It’s Washington D.C.

Those who have children with diabetes want a cure more than anything. Given the nature of the disease, only the federal government has the resources to fund a cure.

As a defender of free enterprise, it’s easy to point to the short term efficacy of markets. A predictable return on investment is why pharmaceuticals and medical devices are big business. But the long term horizon for a cure, ten years at least, means the financial risk and uncertainty for markets is too great. There’s little private investment toward a cure because there is no clear path to financial reward.

Only the federal government can consistently fund efforts toward a cure. Yet our federal government has failed here. Our “leaders” have completely failed to address the biggest spending issues. Failed to even discuss the mildest of entitlement reforms. They have let the gimmick of budget sequestration become permanent policy. And as such, the discretionary resources needed to fund “medical moon shots” for disease like diabetes, multiple sclerosis and Lou Gehrig’s disease are squandered.

Doing this will not only save our country hundreds of billions of dollars, it will also help propel the dreams of a young girl and her hopeful father.

Yet this is not what was going through my head as Kate made the summit.

Instead, it was pure joy. Joy and gratitude for a great day, a great climb, and the ability to watch a kid raise her arms in triumph at 10,400 feet.

Read Patient Stories from The Mighty