IBS and IBD: What’s the Difference? 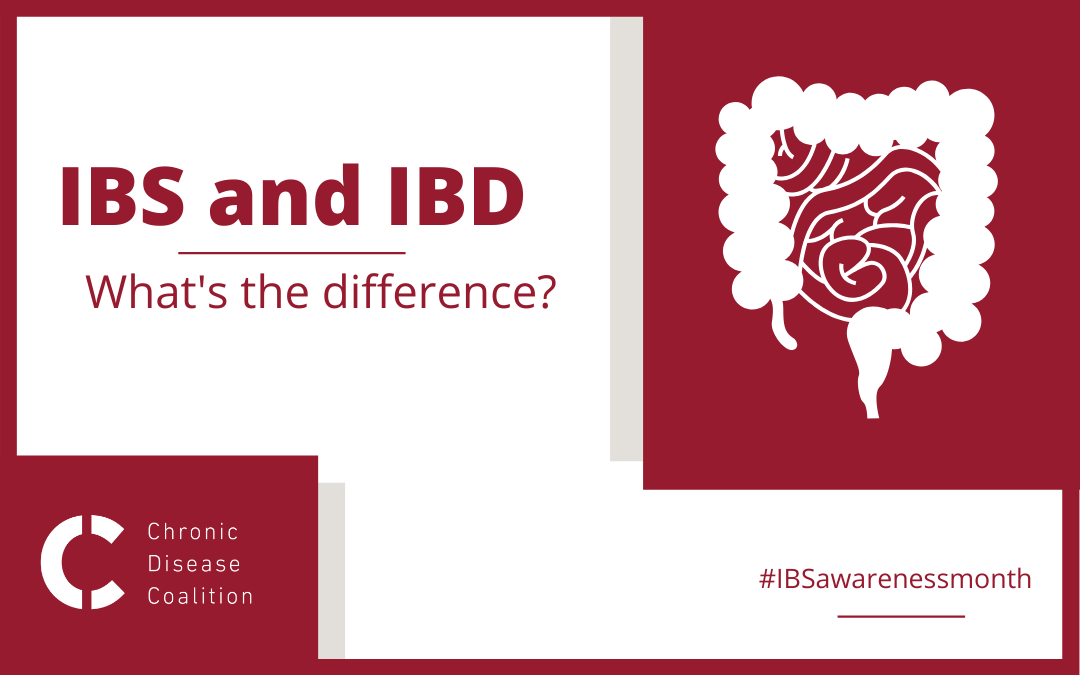 IBS (Irritable Bowel Syndrome) and IBD (Inflammatory Bowel Disease) are two distinct gastrointestinal disorders that often get lumped together because of their overlap in symptoms. Similar acronyms also lead people to talk about the conditions interchangeably which only confuses patients even more. However, IBS and IBD are two very different issues with very different treatment options and understanding the differences between the two is crucial when searching for a diagnosis in order to properly manage your condition.

In this week’s blog, we look at the differences between IBS and IBD and offer some helpful tips to advocate for IBS during IBS Awareness Month.

According to the International Foundation for Gastrointestinal Disorders, IBS is a functional gastrointestinal disorder that can cause abdominal pain, discomfort, bloating, gaseousness, weight loss and change in bowel habits (either diarrhea, constipation or a mix of the two).

Affecting 10-15 percent of adults, IBS is often considered non-life threatening but poses social and economic hardship for patients seeking relief from their symptoms. IBS can cause a great deal of stomach discomfort and varies from person to person. Some patients report mild stomach discomfort while others experience debilitating stomach pain that keeps them from going to work or school, socializing with friends and participating in daily life. Since the quality of life for some IBS patients can be so greatly impacted, many sufferers take issue with their condition being referred to as a “functional bowel disorder.” It is important to note that IBS is only considered functional because it doesn’t cause physical damage to the intestines.

While the cause of IBS is still largely unknown, researchers believe stress can aggravate IBS symptoms and that the syndrome is a disturbance between the gastrointestinal (GI) tract and the brain.

Unfortunately, there is no cure for IBS and successful treatment regiments may vary from person to person. Patients often use diet, exercise, stress management, probiotics, medication and other forms of therapy to treat their symptoms. IrritableBowelSyndrome.net recommends patients keep a close journal of symptoms, medications, dietary habits and triggers to better understand and treat their IBS.

Because treatment and symptoms vary from person to person, raising awareness about IBS during the month of April, and the rest of the year, is key in destigmatizing chronic conditions and empowering patients to seek the high-quality treatment they deserve.

Unlike IBS, Inflammatory Bowel Disease is classified as an autoimmune disease that can cause permanent damage to the digestive tract. According to the Center for Disease Control, IBD is an umbrella term for Crohn’s disease and ulcerative colitis, both of which are characterized as chronic inflammation of the gastrointestinal (GI) tract.

This chronic inflammation can cause permanent damage to the digestive tract which increases the patients’ risk for colon cancer. IBS and IBD share some symptoms such as diarrhea and abdominal pain but IBD patients can also experience fatigue and bloody stool.

Like IBS, researchers do not fully understand why IBD happens. According to the Crohn’s and Colitis Foundation, researchers believe IBD is a mix of four factors: a genetic component, an environmental trigger, an imbalance of intestinal bacteria and an inappropriate reaction from the immune system.

While there is no one size fits all treatment plan for IBD patients, usual therapies include immunosuppressive medications, diet and lifestyle changes as well as drug therapies in order to reduce their symptoms. In many cases, patients with IBD are often hospitalized and need to undergo surgery if the intestines get too damaged.

IBS and IBD may cause similar symptoms, but IBS does not cause permanent damage to the GI tract as a result of chronic inflammation like IBD does. The treatment options for both IBS and IBD are also vastly different. However, the social, physical and economic hardships that can come with IBS flare ups can be very damaging for patients who may miss important life events due to painful bathroom trips.

Remaining aware of the differences between the two is key when communicating with your doctor and advocating for yourself and others in the IBS and IBD communities.