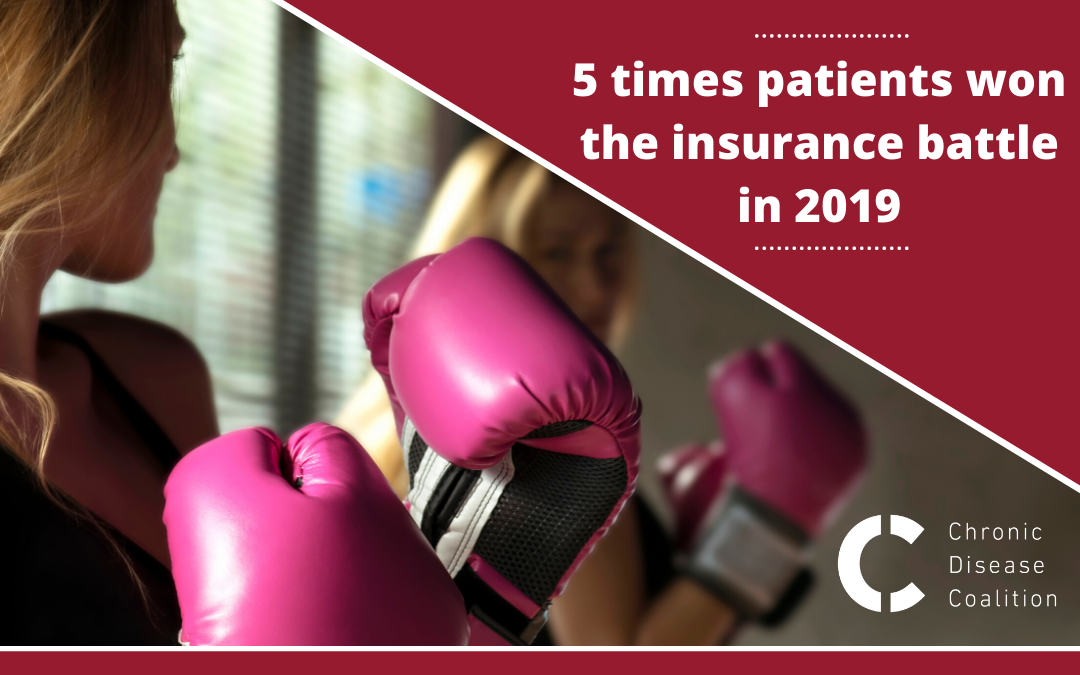 Dealing with insurance companies is a familiar and frustrating experience for many with chronic disease. Insurers continue to pad their pockets by implementing discriminatory policies that target chronic disease patients. Policies like step therapy and non-medical switching may threaten a patient’s wellbeing, and patients must fight for coverage of life saving treatments. This fight can sometimes drag on for years, stalling treatments and exhausting the patient. When patients successfully challenge insurance denials, it’s a cause for celebration. Below are five times in 2019 patients were able to successfully fight their insurance company to receive the coverage they pay for.

A CBS This Morning story, published earlier this month, highlighted one of the many cases of insurers not covering medical expenses, and in this case, cancer survivor Roseanne Neill was able to get coverage and spread awareness about the growing issue of mammogram expenses.

Neill was diagnosed with cancer in 2015 and has been receiving annual checkups covered by her healthcare ever since, but that all changed when she got a new job and new insurer. According to the article, Neill’s annual diagnostic mammogram was deemed not part of standard routine testing, resulting in an out of pocket bill of over $900.

Luckily, Neill was able to bring this issue to light in CBS This Morning news. When CBS News contacted Neill’s new insurer, Atena, they said the original denial was a mistake and her care had since been approved.

Colorado baby Maisie Green has Spinal Muscular Atrophy Type 1, a rare genetic disease that causes rapid muscle atrophy. According to the CBS4 story, 95 percent of children with the disease don’t live past 2, and insurers aren’t helping.

Fortunately, in May, the Food and Drug Administration approved a gene replacement therapy called Zolgensma that has proven to stop and even reverse symptoms in children. However, Ciji Green, Maisie’s mother, was denied coverage for her daughter’s lifesaving treatment by her insurer, until people nationwide rallied for coverage.

After getting national attention from a CBS4 story, Maisie gathered a large following of supporters known as Maisie’s army. Through the financial and verbal support of people across the country, Maisie was able to get coverage for her $2.2 million treatment and has been showing signs of improvement ever since.

“Our world has just been a whirlwind,” Green said. “Everybody fought so hard for her. We took on this insurance company and we won. It was just like ‘We did it, everyone did.’”

Since getting coverage for her daughter, Green has taken her advocacy elsewhere to help fight insurance denials and gain coverage for 16 other children.

Chicago mom Crystal Gorski was diagnosed with negative breast cancer in June 2019, and according to the NBC 5 story, she was denied a special kind of chemotherapy treatment shortly after.

Gorski’s type of cancer is highly aggressive, and as a result the chemotherapy she undergoes is very taxing on her body. After multiple rounds of treatment, her doctors prescribed a new kind of chemotherapy with less debilitating side effects, but unfortunately, this new chemotherapy treatment was denied by her insurer, Ambetter.

“It made me cry my eyes out the day before Thanksgiving when I found out,” Gorski said.

Luckily, NBC 5 contacted Ambetter for more information, and Gorski’s treatment was approved shortly after. Gorski’s story reveals the power of outreach to appeal insurance claims and the issues around coverage for certain chronic disease treatment options.

Melinda Rodriguez’s sister Juanita, from Southwest Texas, has intellectual and developmental disabilities that require she gets around in a wheelchair. Growing up, Rodriguez’s parents would use a plywood board to roll Juanita’s chair into the van in order to get to doctors’ appointments and have special outings. When Juanita moved in with her sister and got a new, larger, wheelchair, Melinda knew something would have to change, the KXAN story reads.

Rodriquez started the appeal process and scheduled a fair hearing while writing letters to the Texas governor, the Texas insurance commissioner and Texas Health and Human Services. Rodriquez also wrote an eight-page letter detailing her sister’s story and sent it to UnitedHealthcare. One-week later, Rodriquez was contacted by the CEO who highlighted the power of Juanita’s story and covered the ramp’s cost.

Rodriquez says the victory comes with mixed emotions because she is happy to have coverage, but the long journey she took to get there has been exhausting, saddening and infuriating, revealing a true shortcoming in the insurance industry.

“I started crying and I said, ‘Thank you’ and I just said, ‘It’s overwhelming,’ you know it’s been a long fight,” said Melinda as she started to cry.

Diagnosed with anorexia at 12 years old, Sophia Uhlenkamp, and her family from Minnesota have been fighting with insurance companies for years. Uhlenkamp’s mental health treatment was going well, until her insurer, Blue Cross Blue Shield of Minnesota, stopped covering the more extensive treatments.

Various treatment options began getting denied and Uhlenkamp’s anorexia diagnosis questioned by insurers, effectively ending coverage for her residential treatment. The family was devastated after receiving numerous denial letters, but Uhlenkamp’s mother, Jeannie, didn’t stop there. Uhlenkamp’s case was brought in front of the Minnesota Department of Commerce who overturned the insurer’s decision.

Uhlenkamp’s story and two others are shared in this ABC Eyewitness News story.

These are just some of the many examples of chronically ill patients fighting insurance companies and getting the coverage they need and deserve. Fighting for coverage from your insurance company can be a grueling process with sometimes lifesaving rewards as seen here. Check out these resources from HealthCare.gov and the Arthritis Foundation if you need help appealing an insurance claim.