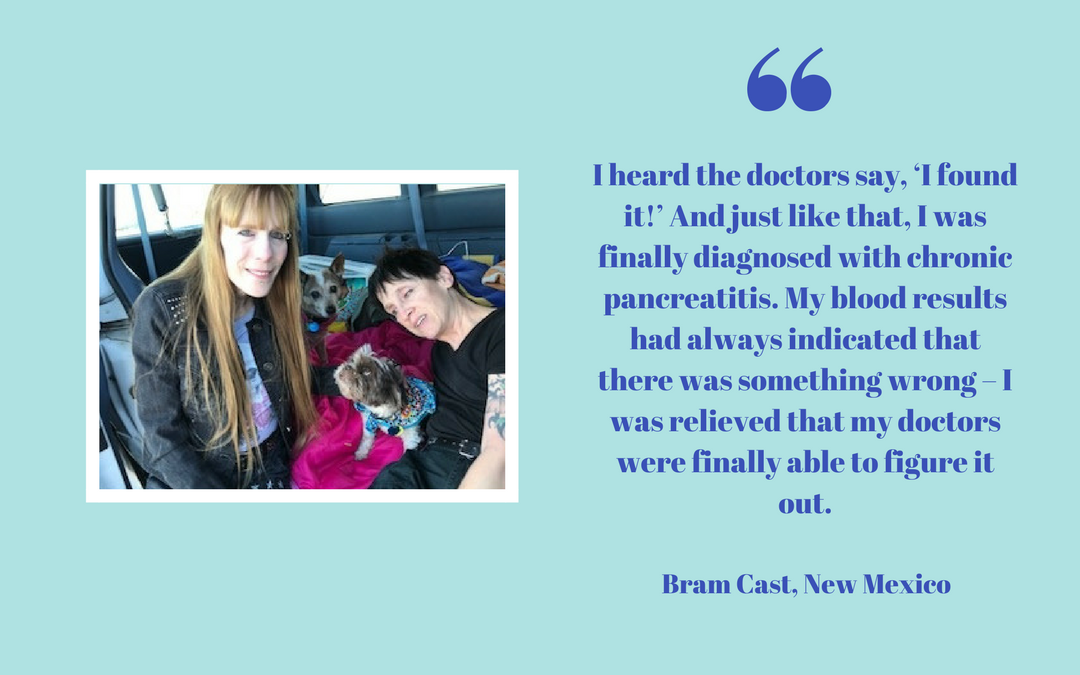 Over 1 billion people are affected by migraines headaches, making it the third most common chronic health condition in the world. Despite its prevalence, Bram Cast never thought she would be among the millions of people suffering from migraines.

Growing up in Levittown, New York, Cast experienced her first migraine when she was only 6 years old. Migraines typically run in the family, and Cast’s mother battled them as well.

“Sometimes I wake up with a migraine and all I can do is take medicine and hope I start to feel better,” explained Cast. “If I have a bit of warning, I am able to treat it and ward it off so I can go about my day.”

In addition to battling migraines, Cast was sick as a child and had stomach pain that caused her to go to the emergency room often. Unfortunately, doctors were unable to determine what was causing Cast’s pain until she finally had an ERCP at age 35.

“I heard the doctors say, ‘I found it!’ And just like that, I was finally diagnosed with chronic pancreatitis,” said Cast. “My blood results had always indicated that there was something wrong – I was relieved that my doctors were finally able to figure it out.”

Cast later learned that she was born with a genetic defect in her pancreas that led to her condition and was likely the cause of the stomach pain she suffered as a kid. Chronic pancreatitis causes inflammation that damages the organ over time, causing the patient to experience difficulty digesting food and producing pancreatic hormones.

For Cast, the biggest challenge with managing her conditions has been gaining access to medication to treat her migraines. While her doctor prescribed 100 micrograms of fentanyl to help manage her migraine pain, the opioid epidemic has tighten regulations and Cast is unable to get the proper dosage she needs, which is causing more frequent attacks.

“Since discussion of the opioid epidemic started, people began to lump everyone who uses opioids in the same category – it’s unfair,” said Cast. “When I go to the emergency room after an attack, they treat me like a drug addict. Without my medication I wouldn’t be able to function, go to work or spend time with my loved ones.”

Many others with chronic pain are experiencing similar trouble accessing the medication that allows them to function throughout the day. We ask you to join us as we work to protect patients’ access to treatments prescribed by their doctor.