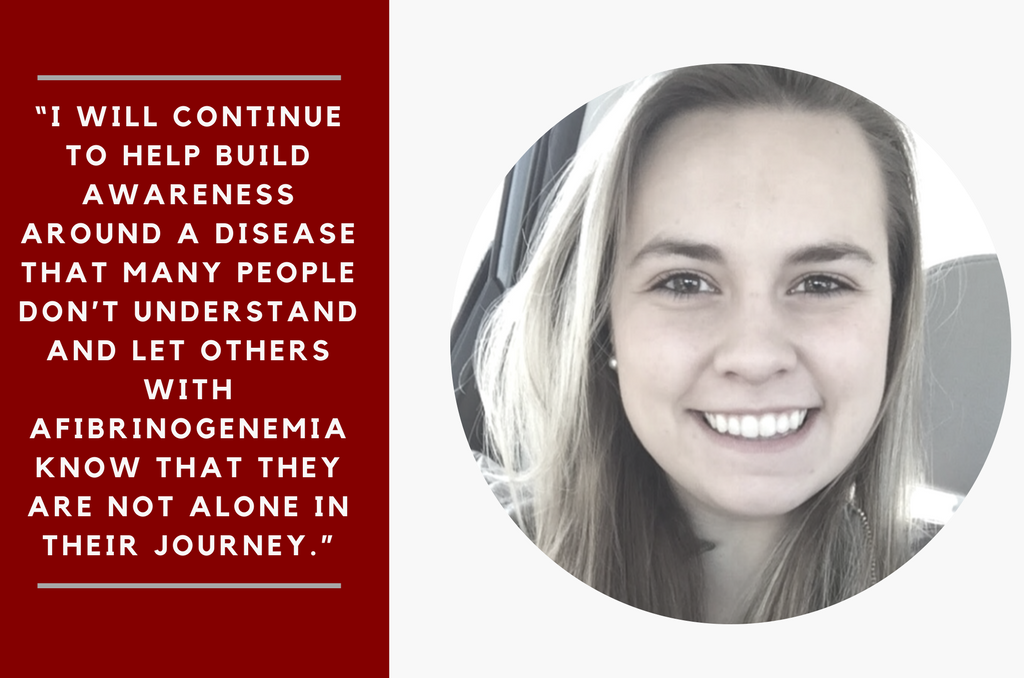 Diagnosed with afibrinogenemia when she was 2 days old, Bridget Hunnewell has had to live life cautiously. But she has never let her bleeding disorder define who she is.

For Hunnewell, advocacy is about raising awareness and empowering others to live the best lives possible. While she struggled to find her voice at a young age, Hunnewell is now a strong supporter and advocate for those living with afibrinogenemia. The genetically inherited disorder prevents the blood of those who have it from being able to clot because of a lack of the protein fibrinogen.

Growing up, Hunnewell was always conscious of her bleeding disorder, but her parents still encouraged her to live a “normal” life.

“I played different sports as a kid, but I knew that I had to be careful,” she said. “The older I’ve gotten, I don’t get hurt as often, but it’s still something that I need to be mindful about.”

A soon-to-be college graduate and an aspiring licensed clinical social worker, Hunnewell continues to live a fulfilling life. Using her personal story and experience, she supports and helps others who are living with afibrinogenemia and other bleeding disorders.

“I’ve always wanted to help people in one way or another, and that’s why I chose to study psychology. I want to help in any way that I can, and there are more ways to do that than I ever thought possible,” she said. “I will continue to help build awareness around a disease that many people don’t understand and let others with afibrinogenemia know that they are not alone in their journey.”

Hunnewell reflected on some of the first conversations she had with others about her bleeding disorder:

“When I first tried to talk about afibrinogenemia, a lot of people would look at me like I had three heads – they’d never heard of it. As a child, this kept me from trying to explain it to people when I was younger. But now that I’m older, I realize and understand that, through advocacy, I can raise public awareness and help more people understand my disease.”

Actively reaching out to online communities, bleeding disorder advocacy groups and connecting with others living with afibrinogenemia, Hunnewell quickly discovered a powerful reward: the benefit of connecting with another person living with the same disease and telling them that you know exactly what they are going through.

Like Hunnewell, we all have our own story and journey. Whatever your path, we encourage you to find your own advocacy style and fight for something that you believe in.Join the fight for patient rights’ with the Chronic Disease Coalition.