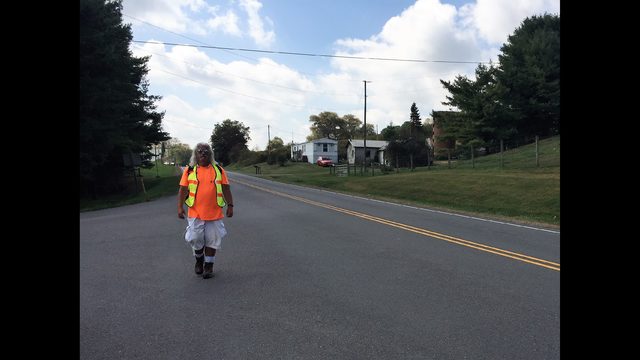 “My biggest surprise is that I’m not 21 anymore,” jokes Cushman, who is now 61. “I’m trying to meet more people this time. I won’t let my age stop me from doing this.”

Says Cushman: “The first three weeks were tough, but by the fourth week my feet started to respond and I went from walking a mile an hour to three miles an hour.”

Cushman’s 1977 muscular dystrophy walk was inspired by the late Jerry Lewis. This time, he’s walking for his family. Cushman’s son recently lost kidney function as a result of being a type 1 diabetic.

“I have raised seven children, and the eldest is a type 1 diabetic,” explains Cushman. “I am a father that had to watch his child go through the turmoil of suffering from a chronic disease. He’s now 38, but growing up we really didn’t understand a lot about diabetes.”

One in 11 Americans has diabetes. Nearly 86 million more are at risk of developing type 2 diabetes. Cushman was one of the 86 million, but since he started his walk across the country, he is no longer at risk.

“When I started my walk in early September, I was on 19 different medications,” explains Cushman. “I take nothing now. I lost 35 pounds in one state. I’m no longer prediabetic and my high blood pressure is gone. It sounds obvious, but diet and exercise is the key.”

Currently walking through Tennessee, Cushman, who is from Oregon, says his cross-country walk is different this time.

“I’m taking my time,” he notes. “I’m trying to meet more people. My original goal was to complete the walk, ending in San Diego, by November 6. It’s now looking like I’ll complete the walk toward the end of November.”

Follow Cushman’s walk across the country, where he vlogs daily about his progress.