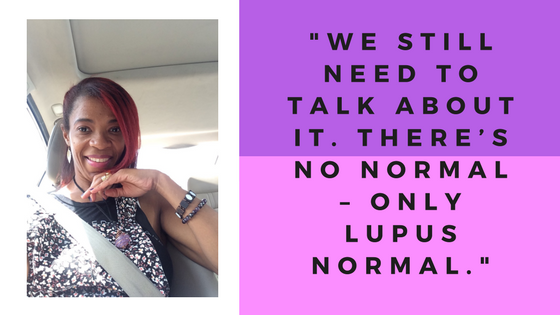 Raquel Jones has been living with lupus for more than 15 years.

An 11-year veteran of the Dallas Police Department, Jones was forced into disability retirement when her symptoms didn’t permit her to work anymore. She and her husband now run an Internet radio station where she talks about a variety of topics, including lupus. But it hasn’t always been that way.

Lupus is a chronic autoimmune disease that can damage your skin, joints and organs. More than 16,000 new cases are reported each year, primarily in people who are 15 to 44 years old, according to the National Lupus Foundation of America.

After she was diagnosed with lupus, Jones learned that she also suffered from kidney disease.

“The doctors originally didn’t think I had kidney disease because I was so fit,” Jones recalled. “But after a few tests, I was diagnosed with stage 5 chronic kidney disease.”

Jones said she had trouble adjusting to life on dialysis, a treatment required multiple times each week to filter toxins from her blood: “I hated the way it made me feel. I hated sitting in a clinic for hours. I hated everything about it.”

Between lupus and kidney disease, Jones also struggled to work with insurance companies.

“I dealt with all the red tape, all the rejections, all the excuses,” she explained. “I’m now on Medicare because of the soaring costs and premiums, but it’s not the same.”

She continued to struggle until it was determined that her mother was a donor match – she could receive a kidney transplant. With the help of family, friends and the National Kidney Foundation, Jones received a kidney from her mother on Oct. 30, 2015.

Jones shares her story with others to raise awareness, connect others with resources and advocate on behalf of patients.

“I don’t want people to feel as alone as I did,” she said. “It’s so important to share stories and experiences, knowing that there’s someone else who has gone through the same thing you did.”