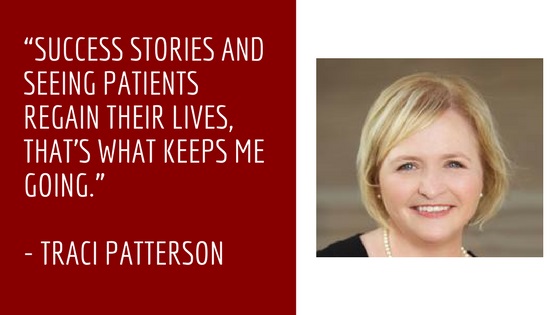 Traci Patterson has a rare perspective on chronic disease. She not only treats those who suffer from chronic pain – she has also been a patient herself.

Patterson was diagnosed with Complex Regional Pain Syndrome (CRPS) after a surgery went awry. She says she’s fortunate compared to many who suffer from chronic pain, as she happened to go to a doctor who knew of CRPS and, as a result, was able to refer her to a chronic pain specialist on her first visit.

“The journey I went through is similar to everyone else who suffers from chronic pain,” Patterson said.

CRPS is a chronic pain condition that often only affects one limb, usually after an injury or surgery. Physicians often begin the therapy process by prescribing opiates to relieve the pain and, like so many others, Patterson never felt full relief. Doctors then decided to use a spinal cord stimulator, which spread the pain to her back, she said.

“A lot of times, with spinal cord stimulators, the condition actually spreads to the place where it’s put in,” Patterson explained. “Once it fails, doctors give up.”

After the spinal cord stimulator failed, Patterson traveled from her home in California to Mexico and Germany to receive treatment. Again, nothing worked.

Eventually, Patterson sought more holistic treatment that looked at the entire body – and finally found relief, she said. Her pain has been in remission for nearly four years, and she has dedicated her life to helping those who suffer from chronic pain – even starting her own treatment program. The program looks at the body as whole, not just the symptoms, to break the chronic pain loop.

While many treatments were covered by insurance, others were not. Coverage sometimes seems to depend on what the insurance companies feel is appropriate (or what they are willing to pay for) rather than a doctor’s expertise. Many treatments, especially those which tend to focus on healing the body, are not covered.

“A lot of these noninvasive treatments go against the norm,” Patterson explained. “And it’s an uphill battle. But look at chiropractors – 10 years ago they weren’t covered, and now they are.”

Patterson believes that conversations need to happen in order to fight back against insurance companies’ harmful actions.

“How do you have a conversation with an insurance company about chronic pain? What steps need to be taken?” she asked. “No one has really tackled that yet.”

Among the many issues that chronic disease patients face, medical insurance companies continue to discriminate against patients with chronic health conditions – including using selective treatments that save insurers money at the expense of patients.

In these instances of discrimination, the Chronic Disease Coalition will continue to advocate for and protect patients’ rights.