In the news: Three states where harmful health insurance practices are making headlines 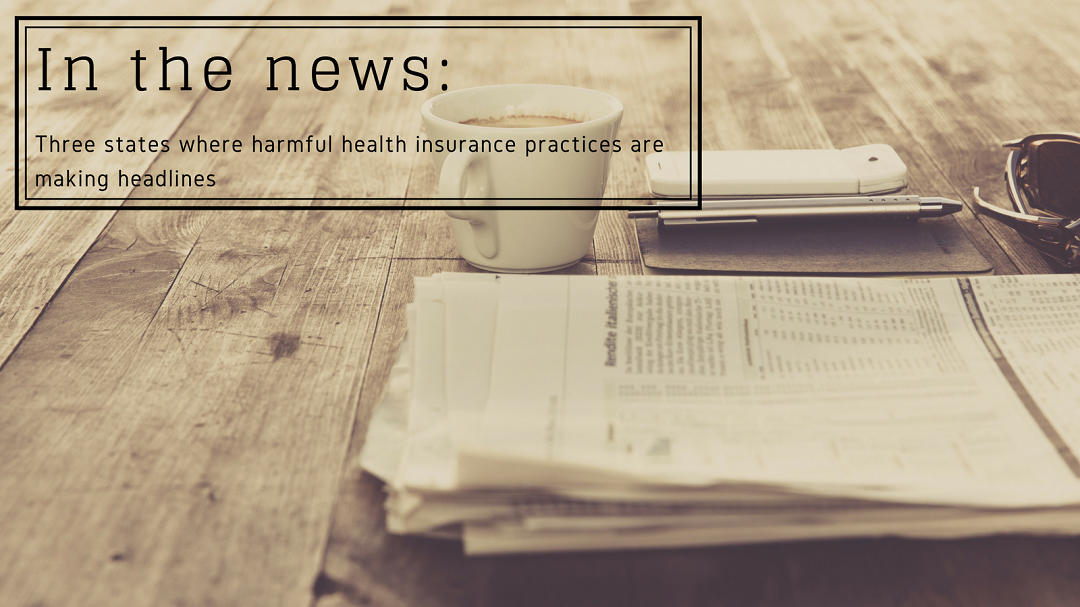 Patients, advocates and elected officials often use the media to promote legislation and bring awareness to chronic disease. During the month of March, we read articles, letters to the editor and op-eds that addressed how to protect patients’ rights. We’ve outlined three of our favorites below:

1. For years, epilepsy patient Erin Guard could not find a treatment that controlled her seizures without experiencing intense side effects, including dizziness and slurred speech. Finally, when Guard was a teenager, her doctors found a substitute that helped prevent seizures without the dangerous side effects. Four months after her doctors prescribed the effective treatment, however, her insurance notified her and said she would have to go back to her original medication or pay out of pocket for the new medication, regardless of whether she could afford it.

Guard, who lives in Illinois, became the latest victim of non-medical switching, an increasingly common – and dangerous – insurance practice that occurs when a provider switches a patient’s prescribed treatment for reasons other than health and safety. The Illinois Legislature is currently considering House Bill 4146, which would prevent insurance providers from changing drug coverage during the middle of a plan year if it had previously approved the treatment. The bill has been assigned to the House Insurance: Health & Life Committee.

2. Fred Jorgenson, president of the Academy of Medicine of Cleveland & Northern Ohio, recently published an article on Cleveland.com raising awareness about two step therapy bills that are currently in the Ohio General Assembly, Senate Bill 56 and House Bill 72. In his letter to the editor, he explains that step therapy can have dangerous health consequences to patients who suffer from chronic illness. Step therapy, otherwise known as fail first, is another harmful insurance practice that happens when an insurance provider believes a cheaper, riskier drug is a better than a doctor-prescribed treatment. Providers will only cover the original treatment if a patient first fails the cheaper medication.

He called for the Ohio General Assembly to act on behalf of patients and pass the two bills that would reform step therapy requirements.

3. Finally, two state representatives in Maine, Bob Foley and Health Sanborn, authored an op-ed published in the Maine Press Herald bringing attention to non-medical switching, a problem many Mainers with chronic health conditions face. While insurance companies attempt to justify non-medical switching by saying it keeps medical costs down, Foley and Sanborn cite a recent analysis from the Institute for Patient Access disproving that theory. (And, in fact, this study found that step therapy may actually lead to an increase in costs due to nondrug expenses.)

The two representatives have introduced a bill in the Maine Legislature, Legislative Document 696, that would address this issue and stop insurers from denying patients access to their prescribed treatment.

The Chronic Disease Coalition supports legislation on the state and federal level that puts patients over insurance profits.