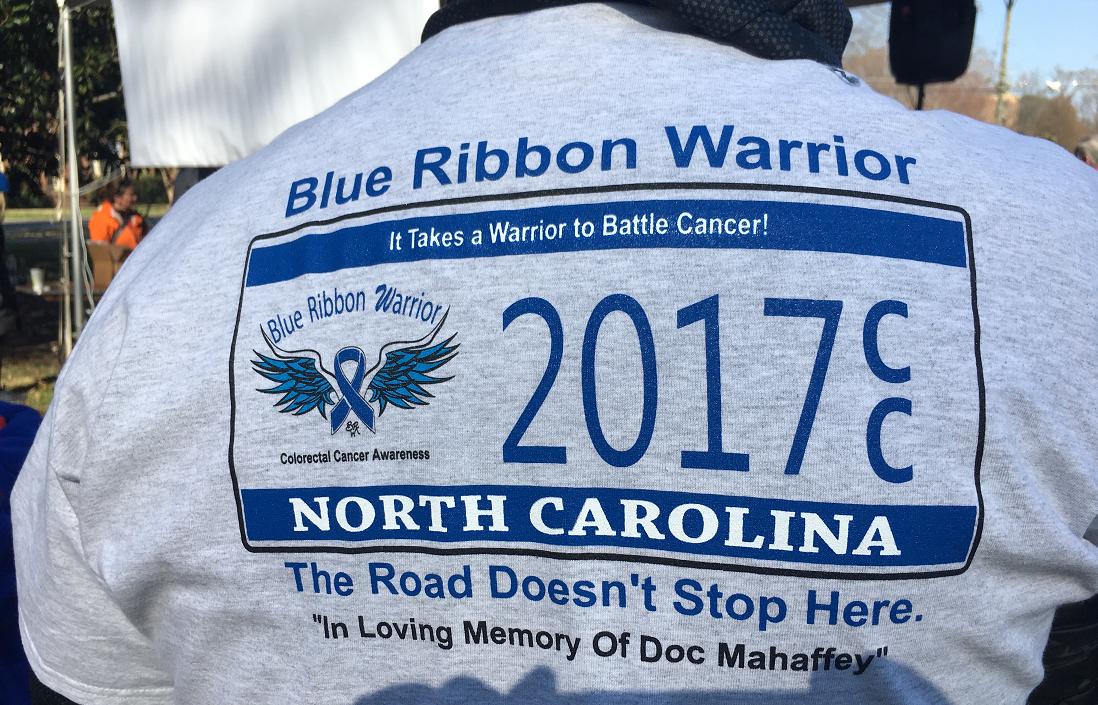 Disease awareness often begins with nothing more than small steps – steps that can lead to big public policy initiatives.

That’s what thousands of runners and walkers in Charlotte, North Carolina, and other cities across the nation are discovering by hitting the pavement at the annual “Get Your Rear into Gear” events, which promote colorectal cancer prevention and detection.

The Colon Cancer Coalition’s annual 5K fun run/walk took on special significance in Charlotte recently, as the memory of one local activist has led state lawmakers to consider a special license tag to promote awareness of colorectal cancer.

Doug “Doc” Mahaffey was known in Charlotte as the “Blue Ribbon Warrior.” Diagnosed in 2010 with colorectal cancer, 56-year-old Mahaffey dedicated the last six years to not only battling his own disease but also promoting awareness for the protection of others.

Colorectal cancer is one of the most common cancers and the second leading cause of cancer deaths in the United States. The American Cancer Society recently released a report showing that colorectal cancer rates are decreasing in those age 50 or older but increasing among millennials and Generation Xers.

For Mahaffey, getting that message to younger people became his life’s focus. Riding his Harley-Davidson and helping to lead the “Get Your Rear into Gear” event in Charlotte, the technology manager became widely admired for talking about a disease that for too long has gone undiscussed – urging younger age groups to get a colonoscopy and take prevention seriously.

“Doc became an evangelist for getting screened,” his brother Joe said during the event in Charlotte. “He would approach friends, family and strangers with his common refrain of ‘Have you had your colonoscopy?’ He was driven by the desire to spare people from what he was going through.”

Last year, the discovery of tumors on Mahaffey’s bladder and lungs only emboldened and strengthened his determination to raise awareness of the disease.

Incorporating his love of motorcycles, Mahaffey sketched out a design for the “Blue Ribbon Warrior” that his family, friends and colorectal cancer community adopted as a symbol of hope and determination. His wife, Donna, had the logo made into pins – the same pins that emblazoned signs in Mahaffey’s neighborhood and could be seen throughout the entire cancer community in Charlotte.

In January, Mahaffey’s lifelong friend, John Powell, asked his struggling friend what he could do to help promote the cause. Mahaffey simply answered, “A license plate.”

“This was Doc’s crusade, to create a legacy for all survivors, their families, friends and those lost to this disease,” said Powell. “I can think of no better reason to be in politics and public policy than to create awareness of any disease in the hopes of preventing it in others, especially younger people.”

Mahaffey would not live to see whether North Carolina adopts his dream. He died at home in February surrounded by family with his funeral attended by hundreds of admirers who truly saw him as the Blue Ribbon Warrior.

As Mahaffey’s life passionately demonstrated, the first step to beginning advocacy is to take action. And you never know what that first step can lead to.

Join the Chronic Disease Coalition as we continue to take steps to protect patient rights and advocate for everyone living with chronic and life-threatening conditions.

If you would like to urge North Carolina to adopt the Blue Ribbon Warrior license plate, individual lawmakers can be contacted here.