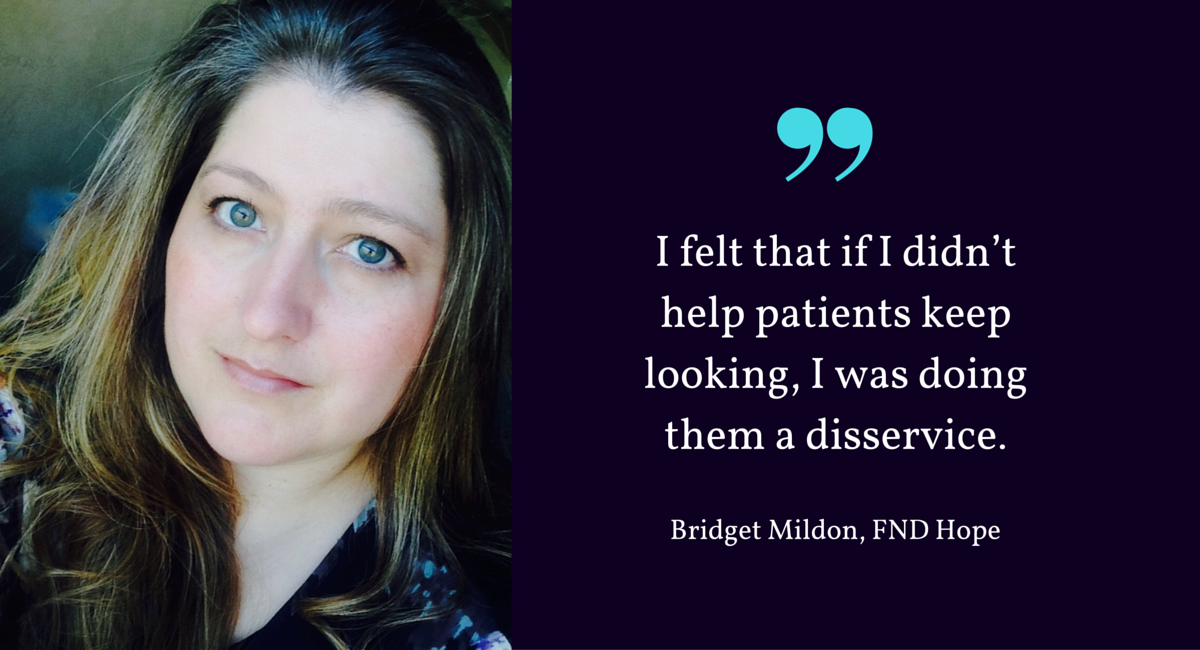 At the time, she was suffering from stroke-like symptoms and was having trouble seeing, performing basic motor functions and even walking. She was also suffering from a chronic case of un-diagnosis. It took multiple visits discussing her symptoms with numerous medical doctors before one finally diagnosed her with functional neurological disorder.

Functional neurological disorder, or FND, is an umbrella term for a variety of neurological symptoms that are not due to a known neurological disease process. Because of this nebulous nature, its meaning varies across medical disciplines and countries, creating major ramifications for patients trying to obtain the care they need.

“It’s a diagnosis of exclusion,” Mildon said, noting that it shouldn’t be that way. Instead, she explained, diagnosis should be based on positive signs and not on negative test results.

The FND designation often means patients with very rare diseases will go undiagnosed or be shifted into psychological treatment even though their condition could be physiological in nature. This was certainly Mildon’s situation in 2012. At that time she had been to numerous doctors, been hospitalized multiple times and still was unable to get a clear picture of what was wrong with her.

And so she started looking for others with similar issues on the Internet.

Online, she found a whole community of folks suffering similar conditions and who were unable to get the help they needed because of their FND diagnosis. Many had been given psychological diagnoses, told that they were responsible for their own symptoms.

Wanting to help people who were in a similar situation as her, Mildon started FND Hope as a website where patients could talk about their symptoms and learn from each other. FND is a nonprofit that advocates for patients experiencing debilitating functional symptoms but whose causes aren’t known. The organization provides information about FND and hosts Facebook groups for patients to interact and receive peer-to-peer support.

Through this online interaction, Bridget came into contact with an Australian patient who had identical symptoms to her own and who was actually getting treatment. Through working with that patient’s doctor, her general practitioner and a hematologist in the United States, she was finally diagnosed with Sneddon syndrome.

This finally allowed Mildon to get the care she needed. It also breathed new life into FND Hope.

“I felt that if I didn’t help patients keep looking, I was doing them a disservice,” she said.

One of the ways FND Hope seeks to help is by assisting patients in talking to their doctors about what they are experiencing. Otherwise, Mildon said, doctors might run a series of tests that all turn up negative and then stop looking for the problem.

FND Hope is also engaged at a research level. Through patient input, Mildon is assisting doctors across the globe in investigating FND more thoroughly and coming up with a standard approach for treating the disease. Right now FND is stuck between neurology and psychology, with neither discipline really wanting to engage with it. Mildon’s hope is that by having clear diagnostic guides for doctors, fewer patients will get stuck in the trap of misdiagnosis and neglect.

It’s an admirable goal, and one that FND Hope is excelling at. From starting in that one hospital bed in Idaho, the organization has grown to having members in 40 countries, has contributed to multiple published studies, and even is in the process of setting up a nonprofit branch office in the UK to further their research work.

Chronic disease, let alone, hard to diagnose chronic diseases, are difficult things to cope with. Mildon’s story demonstrates however how powerful patient interaction and engagement can be.