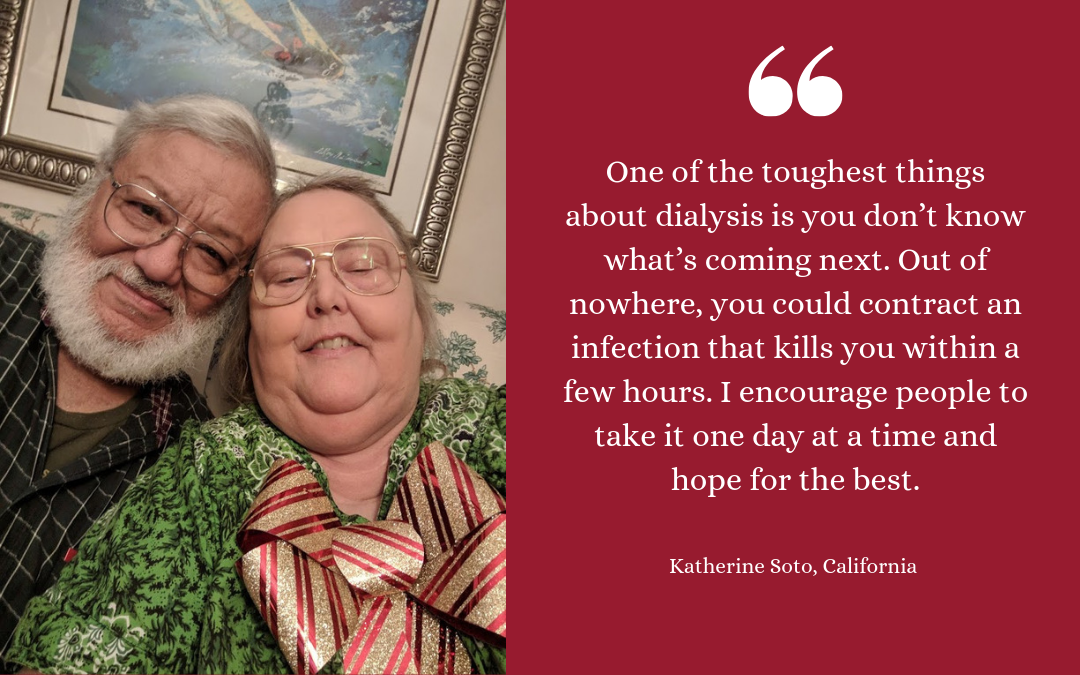 Growing up for Katherine Soto was tough. At the age of 2 she was battling kidney reflux and would continually fight infections. When she was just a teenager, Soto underwent a urostomy, a procedure that, once completed, requires the continual presence and care of an ostomy bag. Soto’s journey with medical complications didn’t end there.

After Soto was admitted to an Intensive Care Unit because of severe back pain, she was diagnosed with kidney failure. She immediately began dialysis treatment to filter toxins from her blood.

“After that I was in the ICU battling pneumonia, along with heart and kidney failure, waiting for a transfusion,” said Soto. “I thought that was it for me.”

Luckily for Soto, it wasn’t.

Early on, Soto decided that she would “dialyze to live, not live to dialyze.” She looks at each day as an opportunity to grow. During her past 20 years on dialysis, Soto and her husband have raised their two daughters, and she worked as a special education teacher, attended a university for additional teaching credentials and began working as an advocate for the chronic disease community.

Soto has endured countless hours of dialysis treatments. Today, she undergoes extended runs at her California dialysis center three times a week. The widespread pain and exhaustion after each treatment can make even simple tasks a challenge.

“I still haven’t found a word to describe how tired dialysis makes you,” Soto explained.

Two years ago, Soto learned that she would never be eligible for a transplant – the only long-term treatment option for kidney failure – due to her low blood pressure. For Soto this initially led to a period of depression, but soon after she decided she wanted to better address her feelings and share them with others who could relate. She started a blog called Life Not on the List.

Soto’s love for writing and learning has fueled her to post almost daily. She uses her blog as a platform to share her thoughts, interesting research articles and community events. But perhaps most importantly, Soto hopes her blog serves as a resource to inspire others who are also living life as a permanent dialysis patient.

“One of the toughest things about dialysis is you don’t know what’s coming next. Out of nowhere, you could contract an infection that kills you within a few hours. I encourage people to take it one day at a time and hope for the best,” Soto said.

The Chronic Disease Coalition was happy to hear from Soto, a woman who continues to embrace her setbacks and approaches each day as an opportunity to make a difference. If you were inspired by Soto, please share your story here.