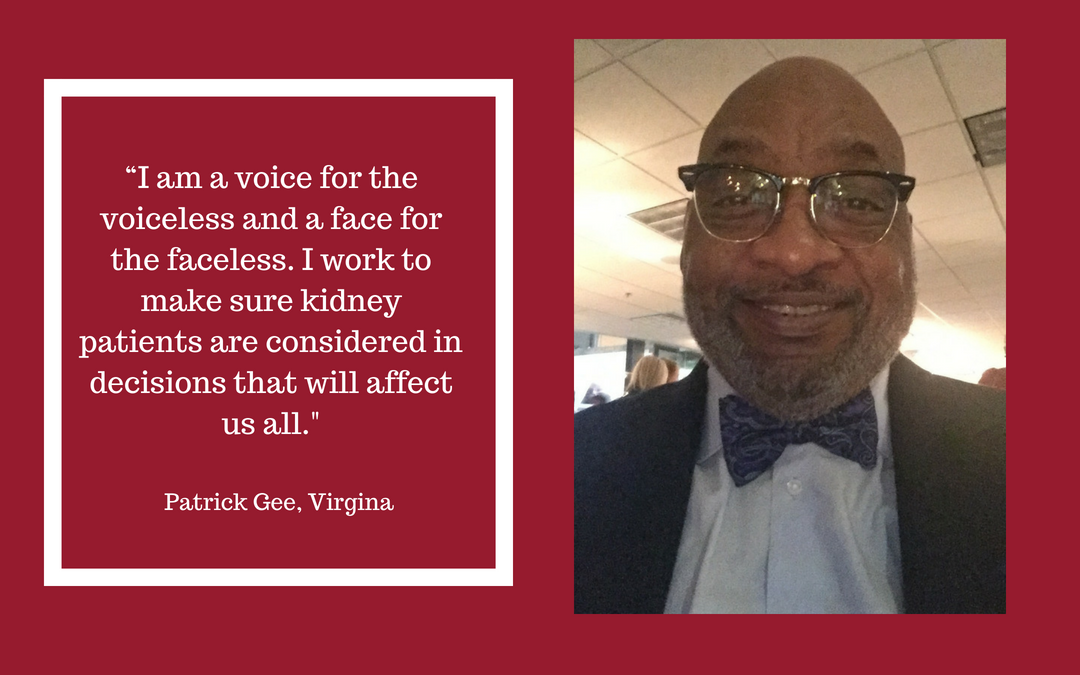 In April of 2013, Virginia resident Patrick Gee received the shocking news that his kidneys were failing. By December of that year, Gee’s kidneys were operating at 14 percent, and he was about to learn more about dialysis than he ever thought was possible.

Gee was the first member of his family to battle kidney disease, and he didn’t know what to expect when he began peritoneal dialysis – a treatment method that uses the lining of your abdomen to filter toxins from your blood. This particular treatment method allows patients some flexibility, as they don’t have to receive treatment at a dialysis center and can instead do dialysis at home.

“Nothing can prepare you for how you will feel after dialysis,” explained Gee. “Every person reacts differently, and it is important to have conversations with your doctors and nurses to determine what type of dialysis treatment might work best for you.”

Oftentimes the recommended course of treatment for patients battling kidney failure is a transplant. In order to become eligible and make the list, Gee started working out at his gym and changed his diet. In 2016, Gee made the list. A year later, he received a phone call confirming that he was going to get a transplant, but his transplant surgery wouldn’t go as planned.

“I woke up from my surgery, but my kidney didn’t,” said Gee. “Nearly 50 days later, and after going through four additional surgeries to address some complications, my kidney finally woke up.”

It is not uncommon for transplant recipients to have a “sleepy kidney” for several days after their surgery, but Gee’s case was unusual. Thankfully, Gee hasn’t had any additional issues and is getting ready to celebrate his first anniversary with his new kidney.

Gee has become an active advocate for patients battling kidney disease and often visits dialysis centers, where he helps educate patients about new medical innovations and encourages people to not let their health condition define them. Additionally, he spends time running a support group and advocating in Washington, D.C., for the American Association of Kidney Patients.

“I am a voice for the voiceless and a face for the faceless,” explained Gee. “I work to make sure kidney patients are considered in decisions that will affect us all.”

Like Gee, the Chronic Disease Coalition works to make sure kidney patients and patients battling all chronic diseases are considered by our nation’s policymakers. Share your story and let us know what issues are important to you.