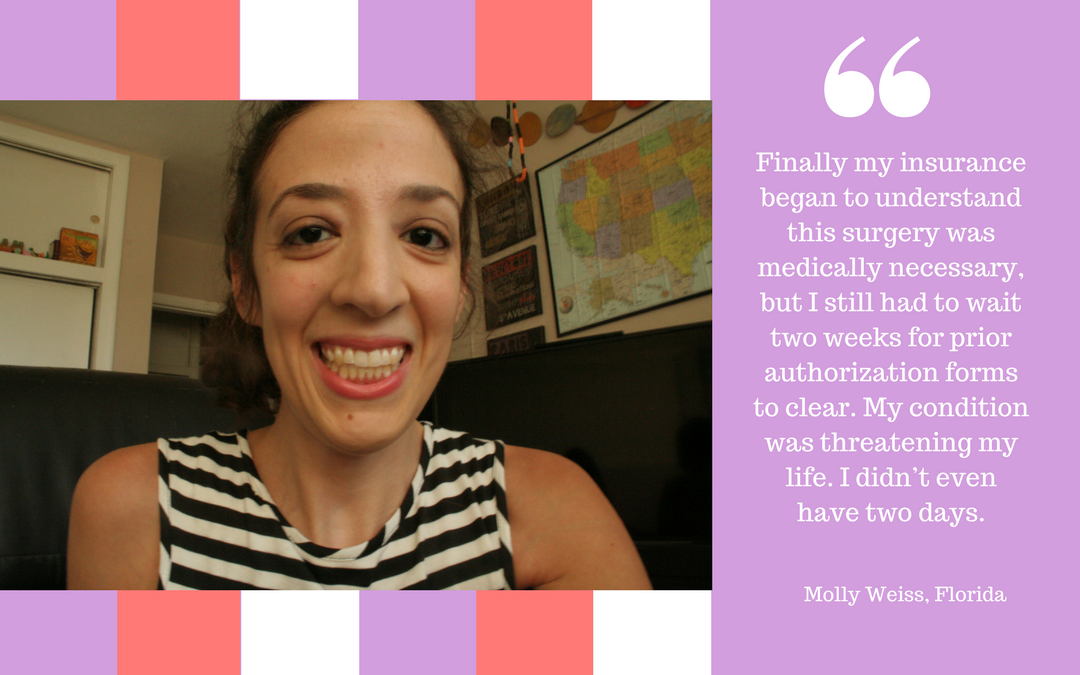 Molly Weiss’ chronic disease story began on a roller derby court in Florida. Weiss was playing the “jammer” position when she fell and dislocated her hip. Six weeks later, she was diagnosed with Ehlers-Danlos Syndrome, and her life completely changed.

Ehlers-Danlos Syndrome is a connective tissue disorder that affects a patient’s joint mobility, how far your skin elacsticy and tissue fragility. This genetic disorder often causes patients to have hypermobile joints, which is what led Weiss to visit her doctor.

“I remember my doctor saying, ‘We finally got one,’” explained Weiss. “While I was waiting anxiously for him to explain what he had found, I was forced to experience his excitement. I knew my life would change forever and he was celebrating because he had come across a patient with Ehlers-Danlos.”

Weiss would soon experience many complications with her condition, including a pelvic organ prolapse. Despite the fact that this meant several of her reproductive organs were outside of her body, Medicaid wouldn’t cover the necessary surgery, a hysterectomy, until Weiss was 30 years old. This meant Weiss would have to wait nearly two years in her condition or pay for the surgery herself.

“Finally my insurance began to understand this surgery was medically necessary, but I still had to wait two weeks for prior authorization forms to clear. My condition was threatening my life. I didn’t even have two days,” explained Weiss. “My surgeon took matters into his own hands and admitted me to the Emergency Room, where I was finally able to get a hysterectomy.”

“I was forced to file bankruptcy at 26 years old because my medical bills were too expensive,” Weiss said. “My conditions took me to a place where I began to question if I was worth anything.”

These challenges led Weiss to become an active advocate for people with chronic conditions, because she never wants anyone to feel alone. Now, Weiss helps others navigate the health care system and shares many of her own stories and experiences on her blog, “Molly Sarah Writes.”

The Chronic Disease Coalition encourages patients, health care providers and caregivers to share their stories and learn more about how you can inspire others, make a difference and become an advocate like Weiss.