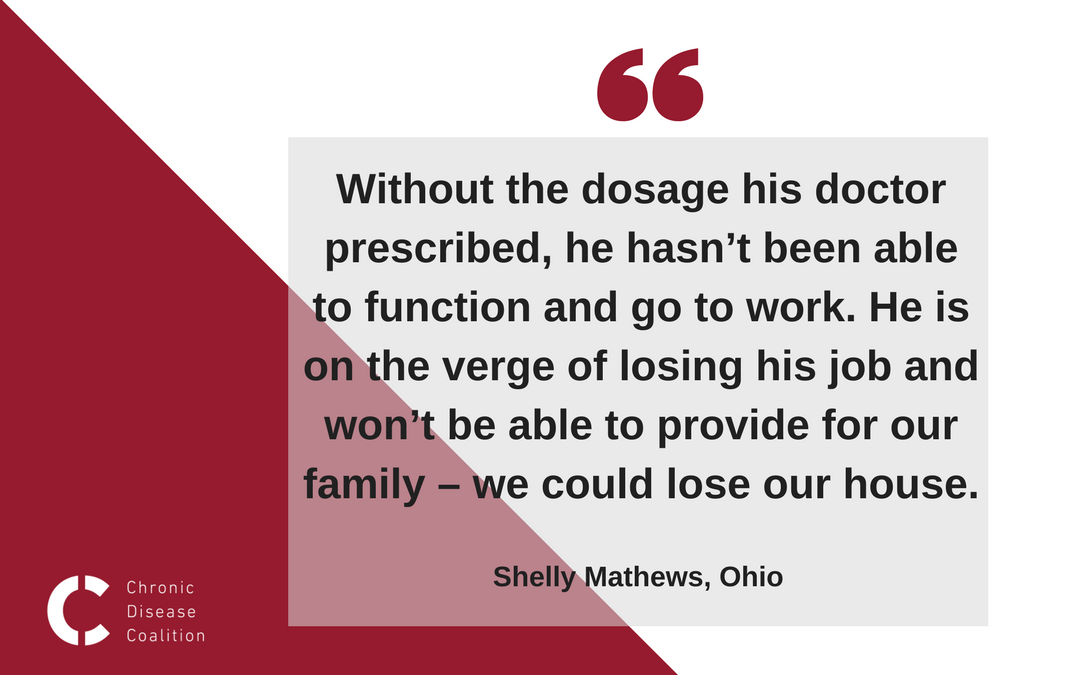 There is growing concern within the chronic pain community about accessing medication that properly manages their condition. And one Ohio resident is seeing her worst fears realized.

Ohio resident Shelly Mathews asked that we not use her real name, as she wishes to remain anonymous for fear of jeopardizing her husband’s access to medication, and we are using a pseudonym. Mathews’ husband battles a chronic pain condition caused by inflammation of a membrane that surrounds the nerves in the spinal cord and causes the nerve roots to clump and adhere to the membrane. To manage this painful condition, known as adhesive arachnoiditis, Mathews’ husband was prescribed morphine by his doctor.

“He has been on pain medication for 18 years and been with the same doctor and pharmacist during that time,” explained Mathews. “For the last seven years, his dosage has remained consistent and managed his pain.”

The proper dosage has allowed Mathews’ husband to work as a craftsman for over 20 years and provide for his family. All that changed when Mathews received a letter from CVS Caremark outlining changes to her husband’s prescription benefit plan.

Mathews quickly called her health plan to get answers about this change and was assured her husband would be “grandfathered” in because he had been receiving the dosage of medication for nearly two decades. When they tried to pick up his medication, however, they were denied and informed he needed to go through a “prior authorization” process, which they did and were again denied. Mathews and her husband appealed, but he was only given access to half of his normal dosage for a shorter period of time.

“Without the dosage his doctor prescribed, he hasn’t been able to function and go to work,” said Mathews. “He is on the verge of losing his job and won’t be able to provide for our family – we could lose our house.”

Mathews and her husband filed a second appeal but were forced through the external review process – the final opportunity to encourage the insurer to overturn their previous decision. Last week they received news that he would not have access to the dosage of medication he has relied on for years to manage his condition, because the insurance company claimed it had “not improved his function”.

“It’s so difficult to see him like this,” Mathews said of her husband. “He is in constant pain and doesn’t have access to the medication that has been allowing him to function normally for 18 years.”

Like many caregivers or family members of patients battling a chronic condition, Mathews has felt helpless as she has tried to fight for her husband’s access to medication.

“When someone in your family has a chronic condition, you may not know what they are physically going through, but emotionally you are going through it with them,” said Mathews. “Chronic disease affects the whole family.”

Mathews and her husband are continuing their fight to access the medication needed to treat his condition. Unfortunately, many chronic disease patients continue to experience difficulty accessing treatment necessary to manage their condition. Join us and fight against discriminatory policies that are preventing patients from accessing care.