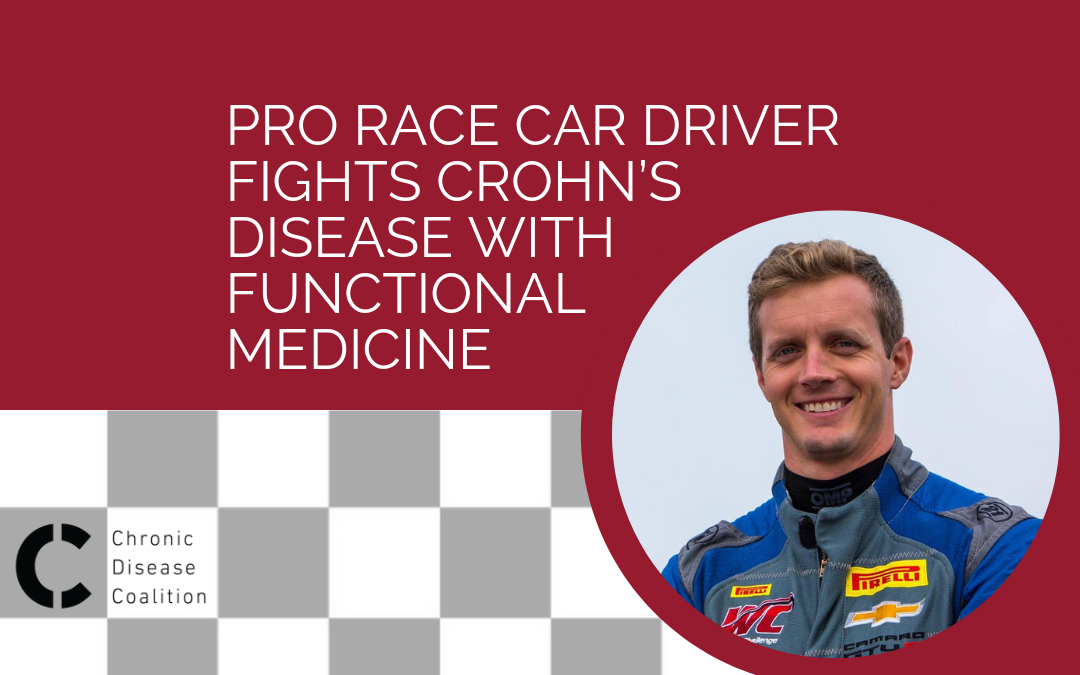 When Lawson Aschenbach climbs behind the wheel in his “office,” he reaches speeds over 170 mph. The five-time Pirelli World Challenge champion trades paint and scorches some of the nation’s most notorious asphalt, achieving a winning career that he began as a boy racing go-karts.

But off the track a number of years ago, Aschenbach faced an additional challenge. He had to apply his racer’s mentality of diligence, focus and stamina when diagnosed with Crohn’s disease and enduring the aggressive lifestyle changes and a dedication to what he calls “functional medicine.”

While sharing his story with the Chronic Disease Coalition, the 35-year-old Florida resident recalled the shock and confusion he experienced as his doctor stood over him in a recovery room uttering the words, “you have a disease.” Aschenbach’s colonoscopy revealed inflammation throughout the terminal part of the small intestinal tract consistent with Crohn’s disease.

Aschenbach described the doctor’s unforgiving words to the feeling of crashing his race car: “In racing, we all eventually wreck, and usually it’s big one. You may end up in the wall or punted into another car. When it happens, it feels like life in slow motion.”

For a person whose career requires him to make lightning-quick decisions, the diagnosis was stunning in its slow speed.

“The doctor had a concerned look on his face, and I never expected to hear those words. I was scared out of mind. Immediately my mind started racing: Is this going to end my career? Am I done in this sport? I didn’t know anything about Crohn’s disease.”

According to the U.S. Centers for Disease Control and Prevention, Crohn’s is one of the two most common forms of inflammatory bowel disease (IBD). Inflammation appearing as red splotches spans the entire digestive tract causing recurring diarrhea, rectal bleeding, weight loss, abdominal pain and fatigue, among other symptoms. An estimated 700,000 Americans suffer from the chronic disease, with a large majority suffering a relapse five years after the initial bout.

Ever since he was a teenager growing up in Maryland, Aschenbach suffered bouts of gastrointestinal turbulence. Often dismissed as stress, the symptoms continued to worsen, especially during a grueling race season on the road for 150 to 200 days a year.

With temperatures in the cockpit of his car reaching upwards of 130 degrees during a race, it wasn’t the time for a flare or digestive discomfort. Not to mention the dizziness or lack of energy that can accompany the disease.

“Just before my diagnosis, I went through a stressful patch in my career, and during that time my symptoms got worse. I couldn’t figure out what was happening and started searching for answers on the internet, self-diagnosing and self-prescribing. Nothing seemed to work,” Aschenbach said.

Even after the medical diagnosis, the pharmaceuticals prescribed didn’t have the intended effect and things continued to get worse. Aschenbach then began exploring holistic treatment options and eventually started working with a functional medicine practitioner he now credits for changing his life.

“Functional medicine was completely foreign to me,” he said. “But in the consultation, everything clicked very quickly.”

Defined by the Institute for Functional Medicine as an “individualized, patient-centered, science-based approach that empowers patients and practitioners to work together to address the underlying causes of disease and promote optimal wellness,” the approach has proven to be worth Aschenbach’s attention and focus.

One of the steps in the new regimen was a diet without gluten, dairy, caffeine, alcohol or other foods working against his gut lining. The goal was to not only minimize but also reverse the inflammation in Aschenbach’s intestinal tract that was the foundation for his distress and discomfort.

“Functional medicine is about treating the cause, not just the symptoms. Clearly, my issue was related to inflammation. How do you counter that? You can use pharmaceuticals, which did not give me the desired results. Or, you can try and rebuild the intestinal lining from the ground up to allow the system to function properly,” said Aschenbach.

For Aschenbach, the approach brought almost immediate improvement. He started encountering fewer flare-ups and almost complete remission within 48 hours. That in itself allowed him to resume his vigorous physical training and martial arts in preparation for the racing season.

“Pharmaceuticals are great for many people in treating disease. They are lifesaving for many individuals,” he said. “But I think what gets lost in translation is that we often overlook the root cause of disease, and that is a glaring issue in the education of our medical community. They are not treating the person as a whole. For me, functional medicine, lifestyle modifications and dietary plans working together produced great results in my life.”

Aschenbach says that overcoming his disease made him a much stronger person in many ways. After years of struggling with the symptoms of Crohn’s, he believes he is now in the best physical condition of his career, placing him in a strong position going into race season.

Finally, instead of focusing on the word “disease,” Aschenbach can instead focus on the words that bring a rush of adrenaline that he loves: “Gentlemen, start your engines.”